I can’t believe its been 10 years since our incredible experience of Glastonbury, attending what is the biggest festival in the world with VIP tickets. 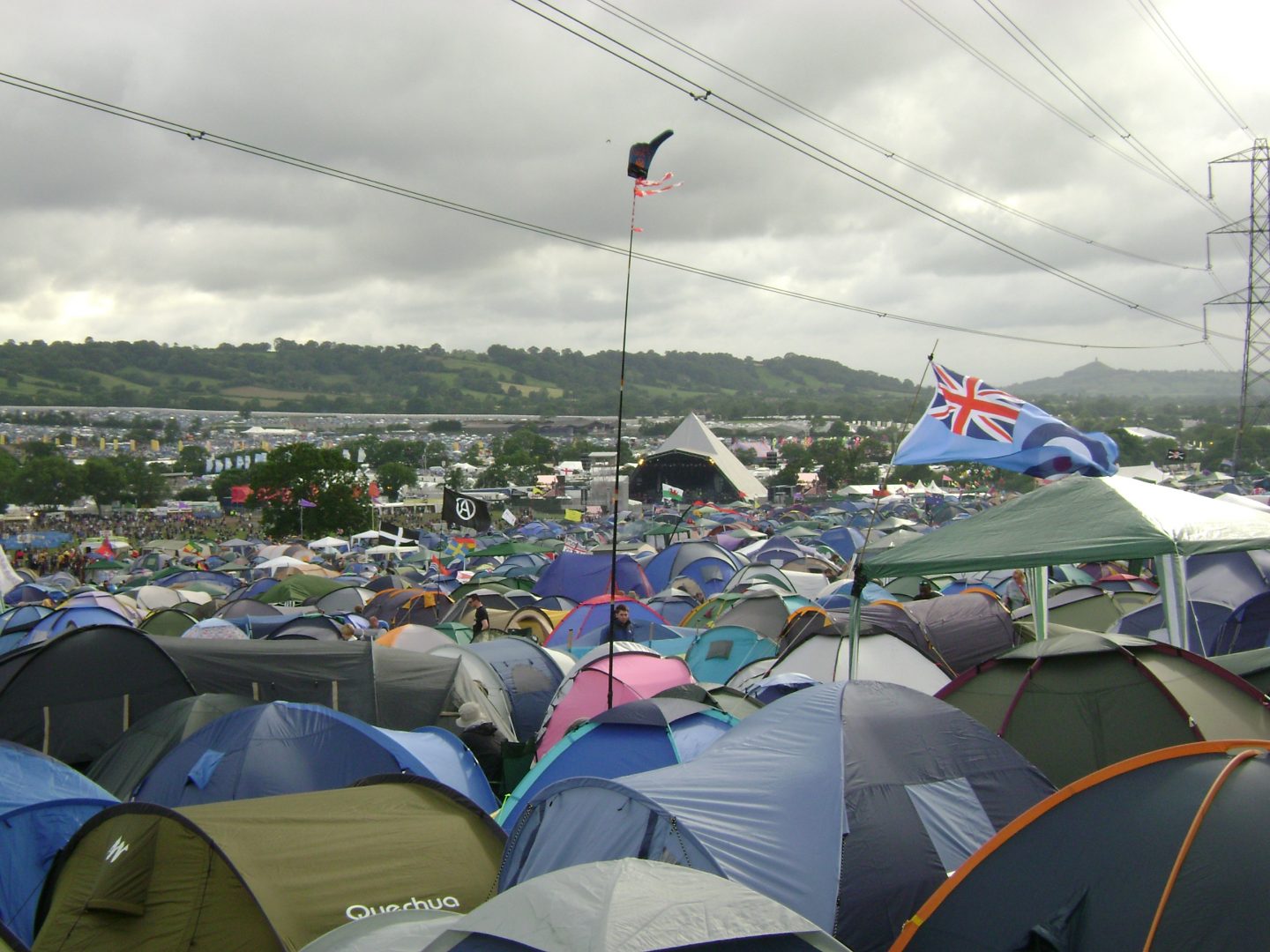 Back in 2007 we had just come home from an incredible RTW trip, and were saving to buy our first home.  We just didn’t have the money to pay for tickets to the greatest festival the UK has to offer.  So when we noticed that our local pub was offering the chance to win VIP Glastonbury tickets when buying a pint of Carlsberg, we changed our choice of drink for the evening.

As Darren text in number after number for the chance to win the tickets of our dreams, I plumped at just one code.  I didn’t have a contract phone and couldn’t afford the multiple text prices.

I never though that that one code would be enough….

A few weeks later, I was called by a chap who worked for Carlsberg, who informed me that we had won VIP tickets to Glastonbury.  I had never once won a prize in my life, and certainly didn’t think that my 12p text message could have made us win such an incredible prize.  Instead of screaming and shouting in disbelief, I told the messenger to F**k off and stop playing games as I hung up.  I truly believed it was friends playing a trick.

Undeterred by my rudeness (I was terribly apologetic later), the chap called back and explained that it was not a joke.  We would be heading to Glastonbury, all expenses paid!

The screaming and shouting later followed when I called Darren with this incredible news!

As well as tickets to the festival, our VIP experience included included transport to the festival, a pre-erected tent in the hospitality camping zone (with a couple of crates of Carlsberg chucked in for good measure), and food and drink during the weekend.  We had plenty of room around our tent, access  to private chill out zones, clean showers and nice toilets.  What’s more, we even managed to go backstage on the pyramid stage!

On the day we arrived at Glastonbury the weather was beautiful.  However it didn’t take long for the typical UK festival weather to arrive.  It didn’t dampen our spirits, though, it just meant we made good use of our funky brollies and bright rain coats brought especially for the occasion!

Backstage of the Glastonbury Pyramid Stage

Without doubt, one of the highlights of our VIP Glastonbury experience was watching the Fratellis perform.  We watched this set backstage on the Pyramid stage!  It was an incredible experience.  We could truly appreciate the scale of the festival by looking out at the sea of people.  I can’t imagine the buzz you would get from performing on the most iconic stage on the festival scene! 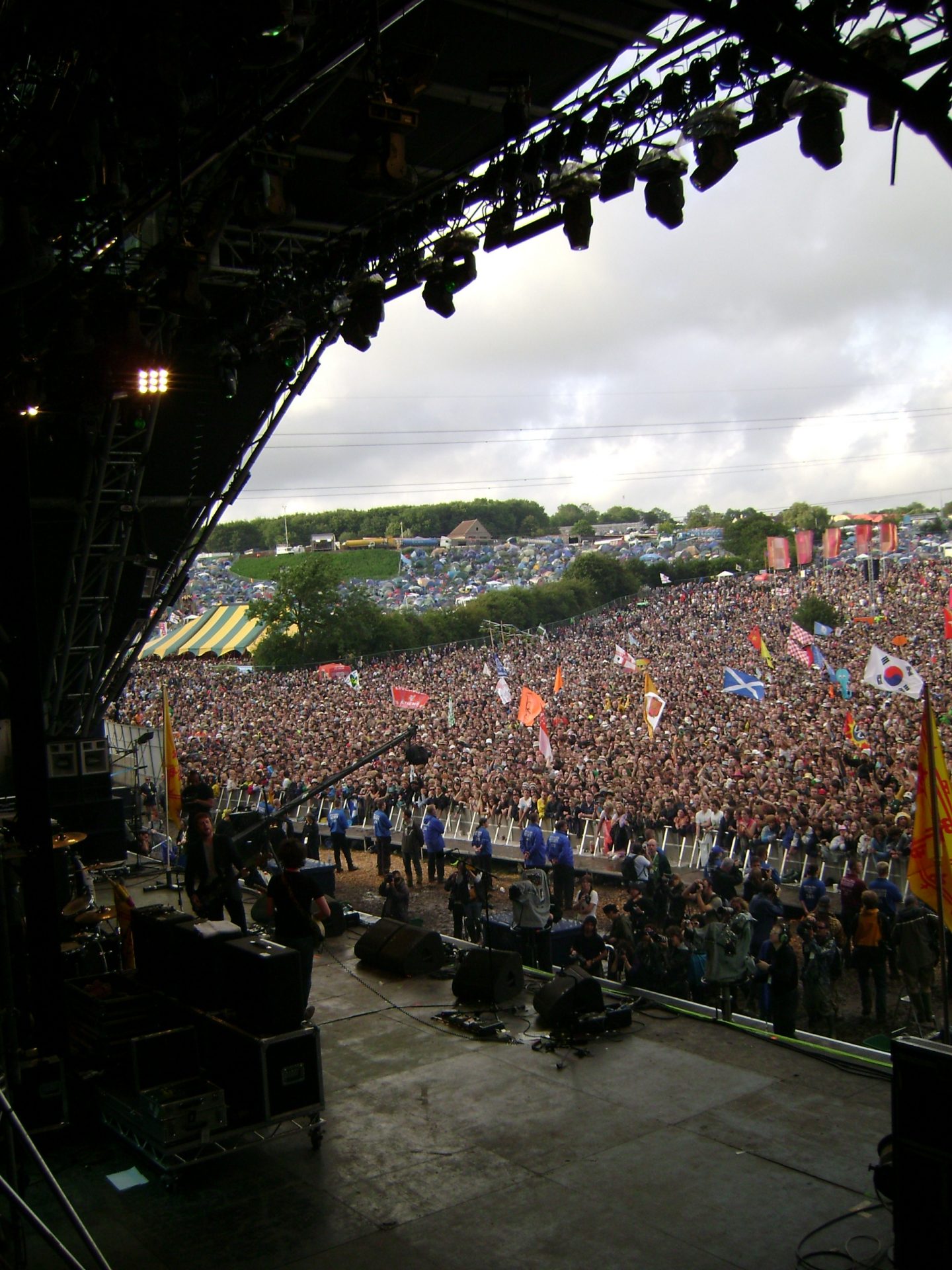 I’m not sure how we found out, but Hard Fi, my favourite band EVER were performing a gig at Glastonbury which was listed nowhere on the programme.  I made it my mission to find out where this was.  It’s that long ago that I can’t quite remember how we did find out in the end, but I’m so glad we managed it.

The secret gig Hard Fi performed at Glastonbury was probably the best gig of theirs Darren and I have ever been to (we’ve seen them multiple times).  For a festival of Glastonbury’s size, there was just a few hundred people in the tent.  We were on the barrier (not unusual for us, anyway!) and the crowd were going mental.

After an incredible weekend, we finished our Glastonbury experience watching one of the best dance acts, ever.  We didn’t care that it was pouring with rain and that we had mud up to our elbows.  This was Glastonbury, and we had most incredible festival experience we will probably ever had.

As the crowds start to arrive for what is probably the biggest and bestest festival in the world, I can’t help feeling a little envious. I’m not sure our incredible VIP Glastonbury experience could ever be beaten or indeed, repeated.  But I would absolutely love to go back to Glastonbury!  I hope one day we are lucky enough to get hold of these golden tickets.