10 years after abandoning our RTW trip, we finally arrived back in New Zealand – a trip which we have been counting down to probably since 2006.  We decided to start our New Zealand road trip in the North Island, flying in to Auckland before driving down to Wellington where we would get a ferry to the South Island to continue on.

Flying over with Emirates, we touched down in Auckland just before 5pm and in time for rush hour.  Although we first considered hiring camper van, we decided against it.  The hire costs were pretty extortionate, and I read a horror story about bed bugs which completely put me off.  So instead we picked up our hire car, which we affectionately called Greenie. Fortunately our lovely airbnb accommodation was just a half hour drive from the airport and was on the outskirts of town in a little village called Drury.

Taking the suggestion from our airbnb host, we walked around the corner to the local village pub for dinner. We arrived to find most of the tables reserved, but found a small one in the corner. It was quiz night in the pub and it seems we were lucky to find the last table.

The quiz actually looked quite good. There were proper booklets for the answers – no scrappy paper like the pub quizzes I used to go to in England. I was sad that we didn’t really have enough people (or brain cells) to form our own team. although we decided to keep a note of the answers to see where we might come.

We never got round to this though, as the first round of the quiz was ‘British Food’. I asked if the table behind us wanted to be our friends in exchange for answers. They did, and we helped them get 9/10 on the first round to put them in the lead. After this, we were unofficial members for the duration of the quiz. By the end of the evening, they had won second place and a bar tab for another evening. Sadly we never got to join them for a winning pint, as we had our New Zealand road trip to get on with.

OFFER: Get £25 Airbnb credit to use on your first stay

After our first good sleep in 5 days, we set off on our brief tour of the North Island of New Zealand.  Our first destination was Rotorua.  An old work colleague of mine, Vic, moved out to New Zealand a few years prior so I was looking forward to a catch up.

We arrived in Rotorua in time for lunch, which was good. Darren and I were both getting a bit narkey. After picking up some picnic snacks in the local supermarket we sat by the beautiful Lake Rotorua.  Hunger anger was quickly subdued and we set about to look for a plan to spend the afternoon until Vic finished work.  Darren already knew that Rotorua was famous for its hot Springs.  I didn’t.  But soon realised why.

Almost as soon as we set off from Lake Rotorua, I spotted steam.  We pulled over and found ourselves exploring Kuirau Park, a free public park with lots of boiling thermal pools. 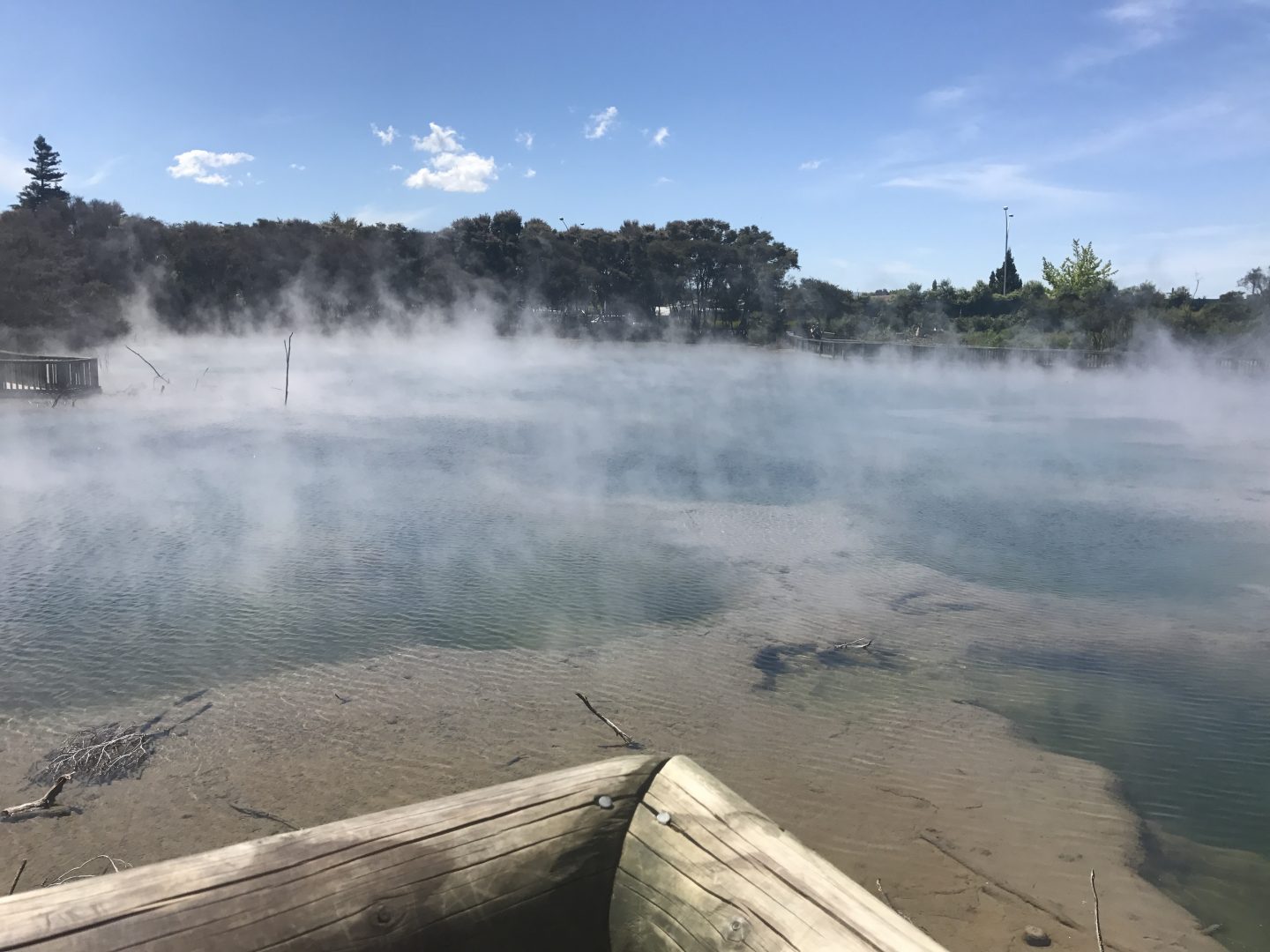 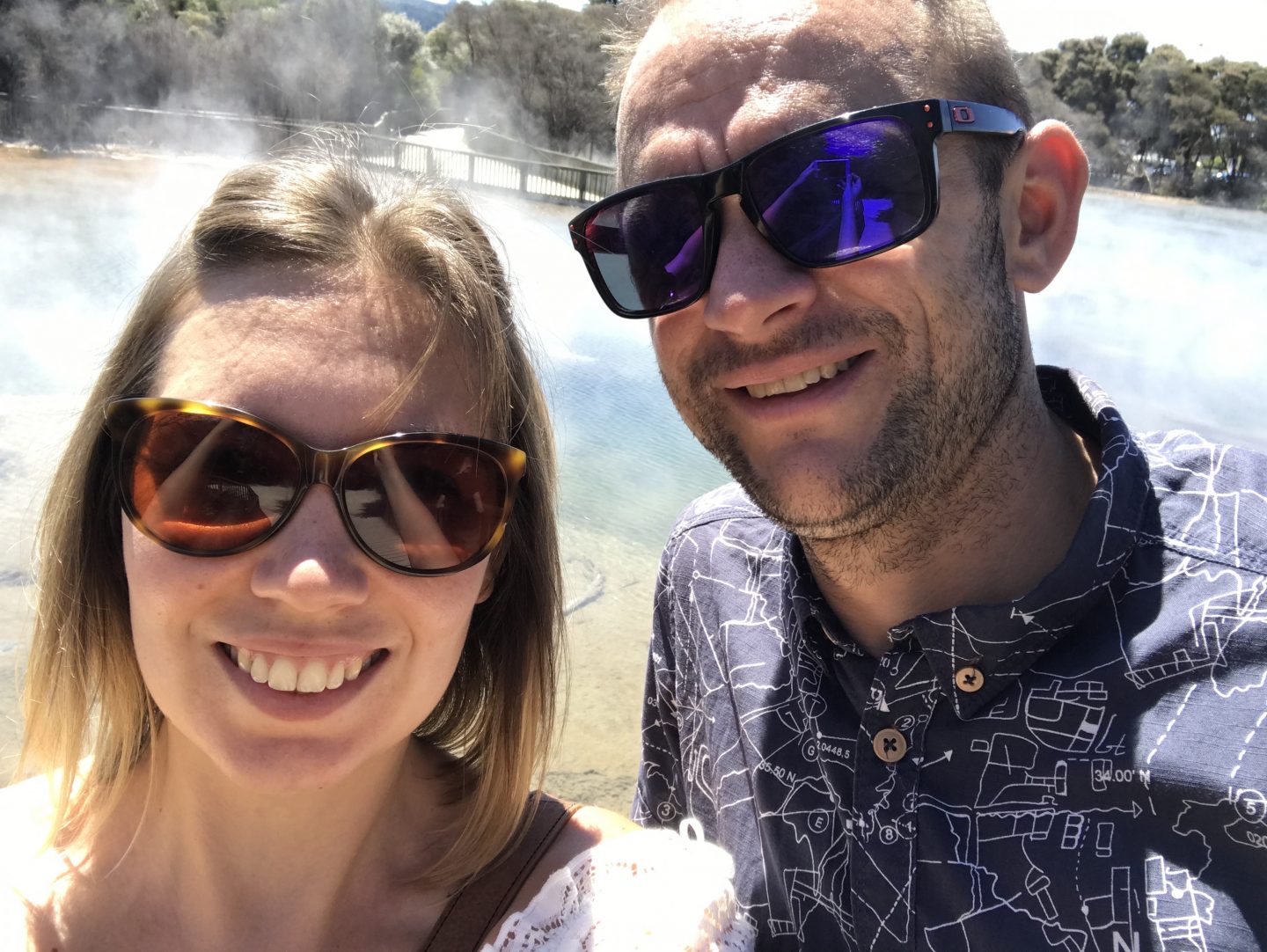 It was a good way to pass an hour, but we still had a couple to go before Vic would be finishing work, so we set off to explore the wider Rotorua area.

Just a short drive, we came across the beautiful Lake Ngahewa.  We only had time to stop for a short time, but I actually preferred it to where we had stopped on Lake Rotorua. 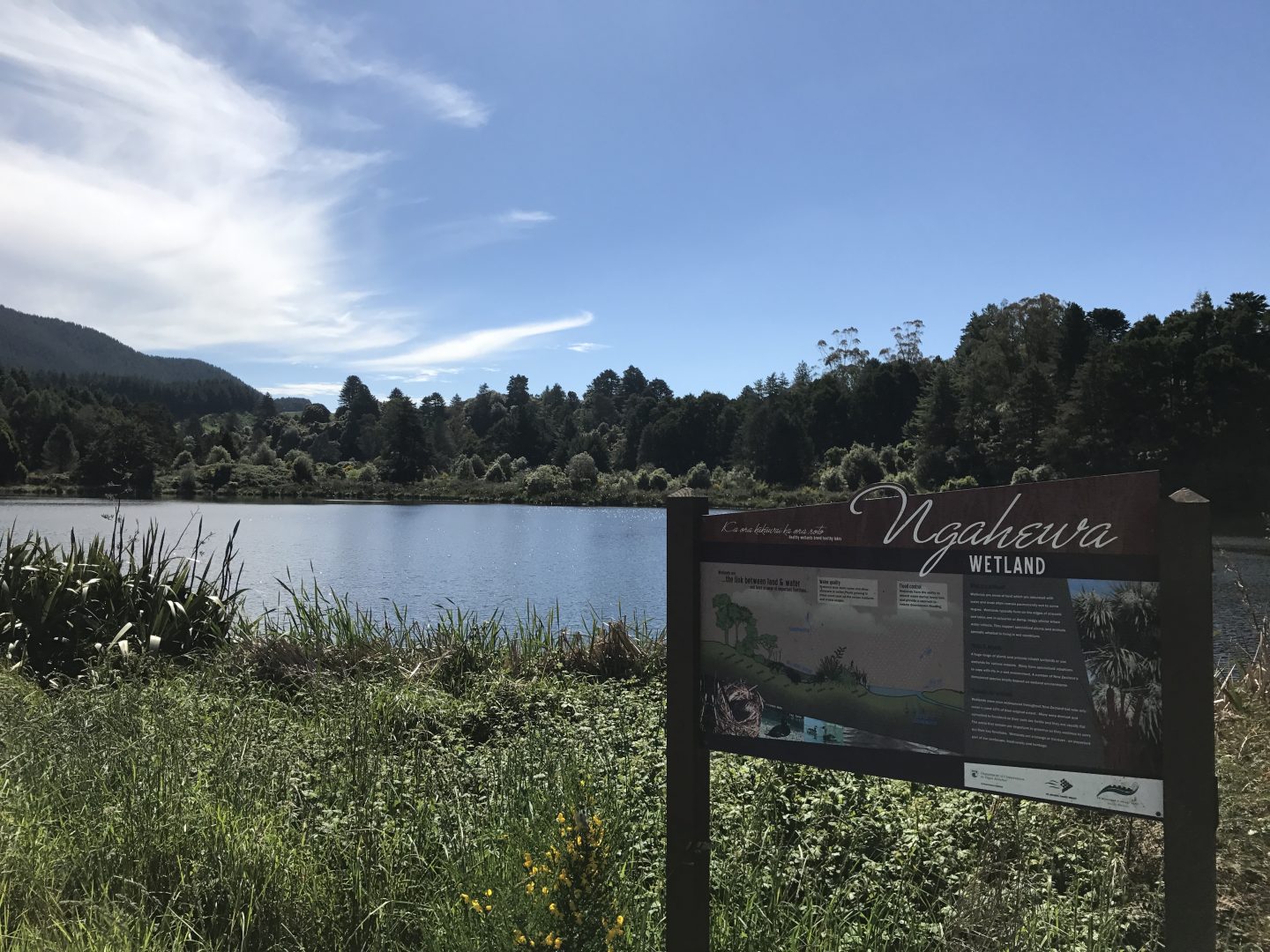 Darren wanted to swim in the hot springs, and google indicated that we were fairly close to Wai-O-Tapu.  When we arrived we found a steep entry price and imminent closing time, so re visited google and found that there was a free hot pool down the road.  We found a stream of hot water from The Wai-O-Tapu geothermal pools which met the cold river.  As Darren popped his whole body in, I dipped my feet in.  We found the exact spot where the two water streams met.  It was a bit of an odd experience.

Our final stop before heading back to visit Vic were the thermal mud pools. 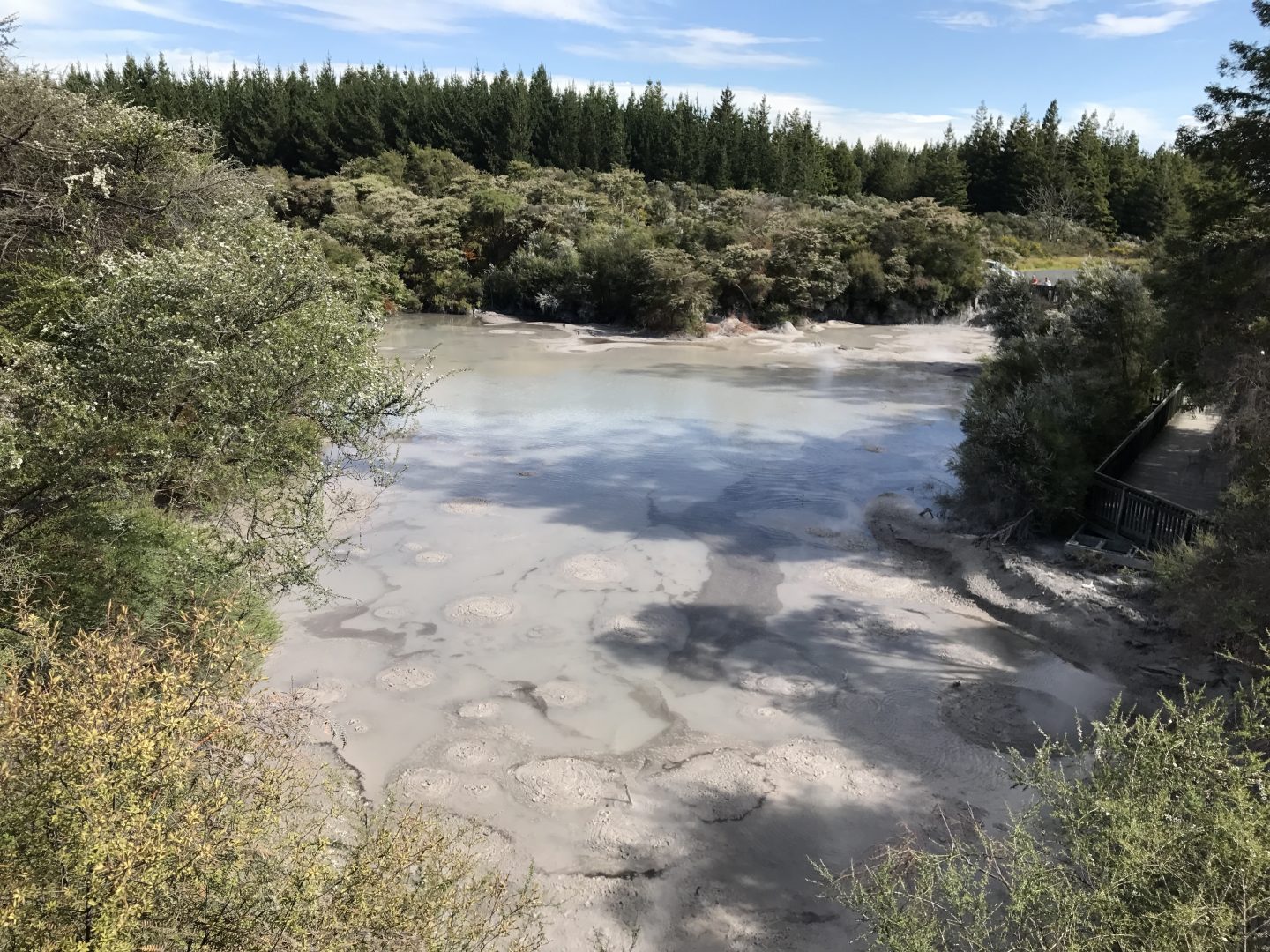 We also stopped to take this photo of the beautiful hills.  With views similar to these, it’s easy to see why Vic moved to Rotorua and didn’t stay in Southampton….. 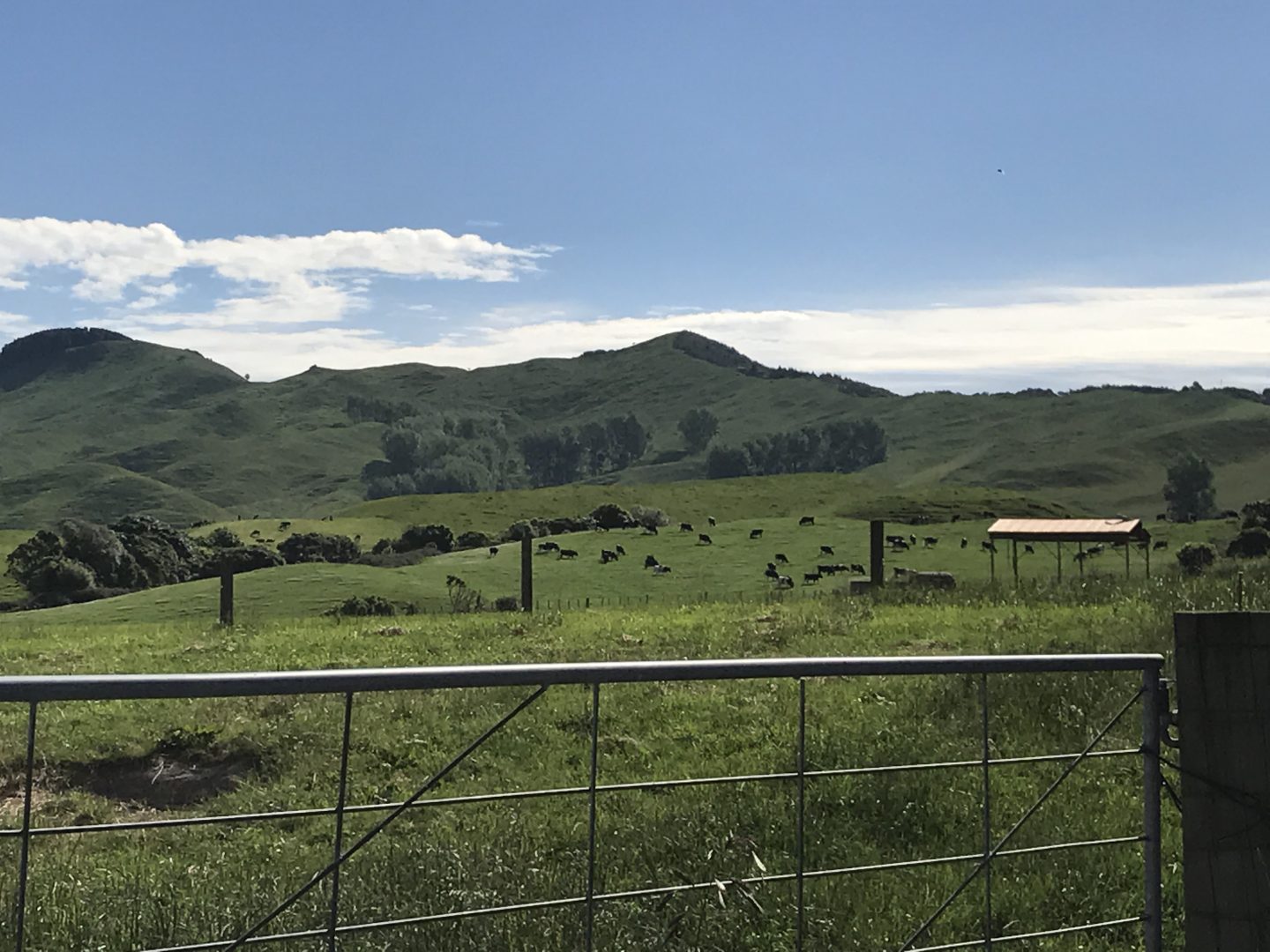 We met Vic in Eat Streat – a trendy strip of bars and restaurants in Rotorua.  We caught up with a meal for the night market and a wander around the Government Gardens before we were treated to a comfy bed for the night.

After a lovely evening with Vic & Kev, we set off at just after 7am to catch up with more of my pharmacy buddies, Rosie & Claudine.  It took us over 10 hours to travel the rest of the North Island to reach Wellington.  In fact, it’s amazing we covered so much of the North Island in one day.  We stopped numerous times during such a pretty drive.

Darren dubbed the North Island “Telly Tubby land’ due to the numerous bright green hills. As we passed them, we came across the following attractions. 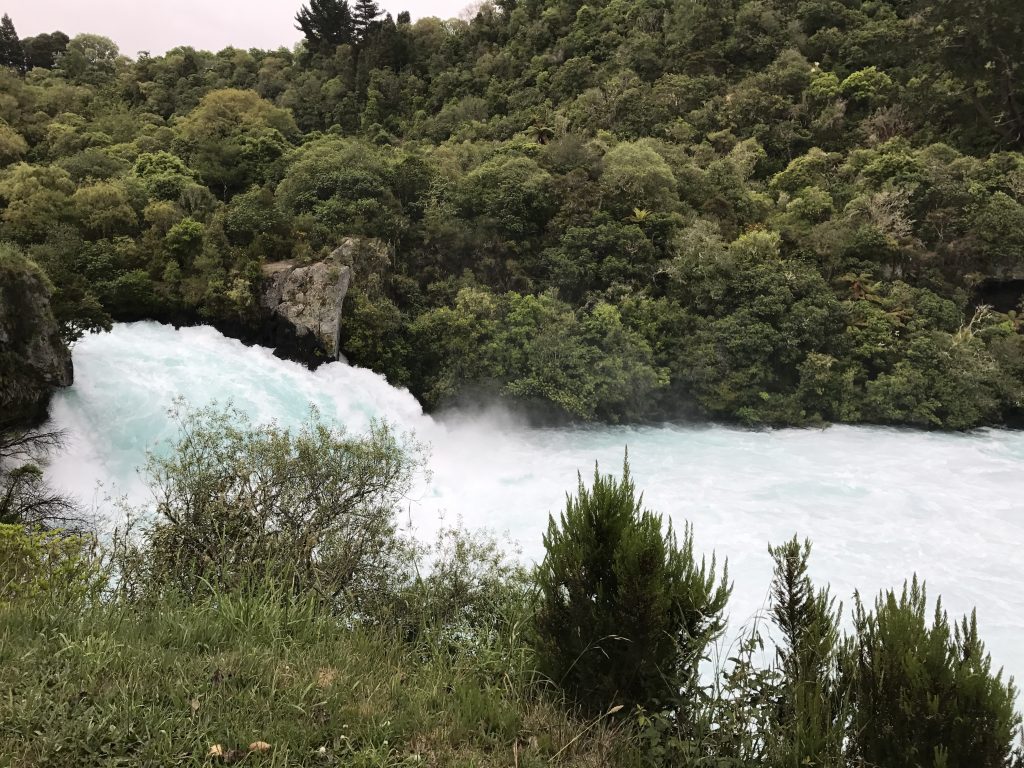 Huka Falls is the most visited natural attraction in New Zealand, although our visit came about quite by accident.  We spotted a sign for Huka Falls an hour after leaving Rotorua so decided to stop.  It’s no surprise its such a popular attraction, the falls were incredible.  We were really lucky and actually got to experience the falls by ourselves due to our early impromptu visit. 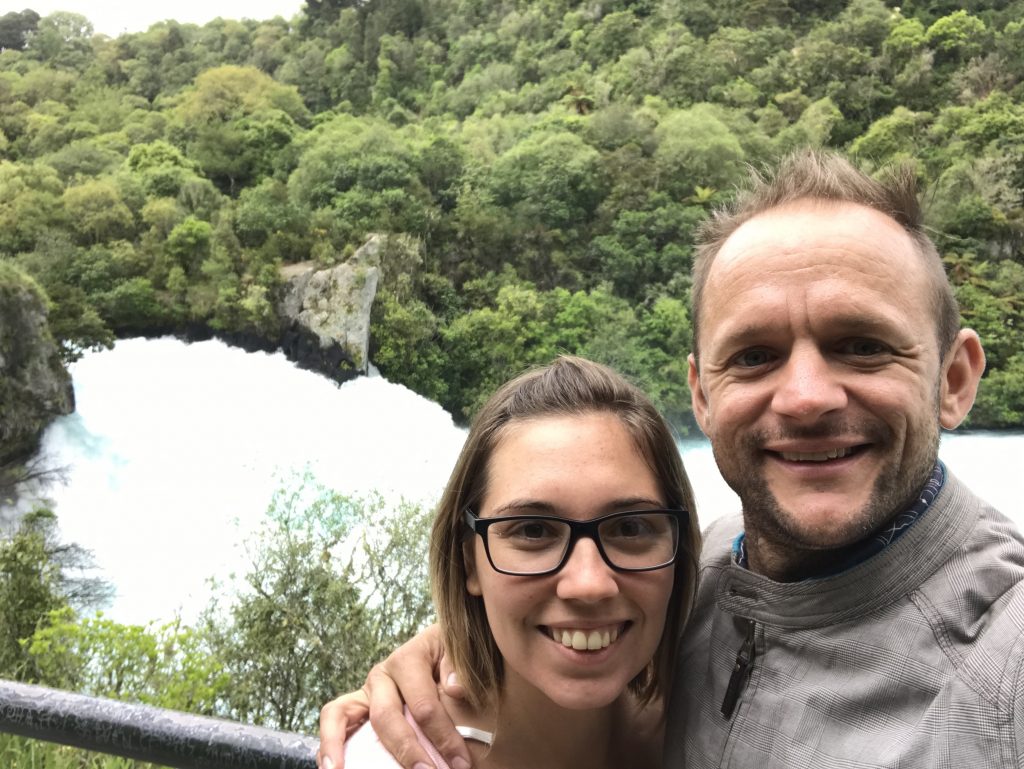 My friend Kaylie (who we later met in Queenstown) was travelling New Zealand at the same time as us.  She put some photographs of her visit to Tongaririo Natural Park up on Facebook.  It looked incredible, and she suggested we visit if we were passing.

Sadly for us, the walk they had taken to the Emerald Lake took over 8 hours. We just didn’t have time to fit it in.  We also didn’t have the array of clothing that is required for the walk.  But our journey did see us drive through the out natural park.  For the reasonably short part of the journey, the weather changed so much! One moment, there were bright blue skies, the next it was grey and overcast.  In some areas the wind was so strong, there were sandstorm blowing as us.  We had to get back into the car after we had stopped for a walk.  Soon, however, the sun was back out and shiny.

Darren likened it to being on the moon.  Not of course that we have any idea what it is like to be on the moon.  But in our heads, this is what the moon is like! 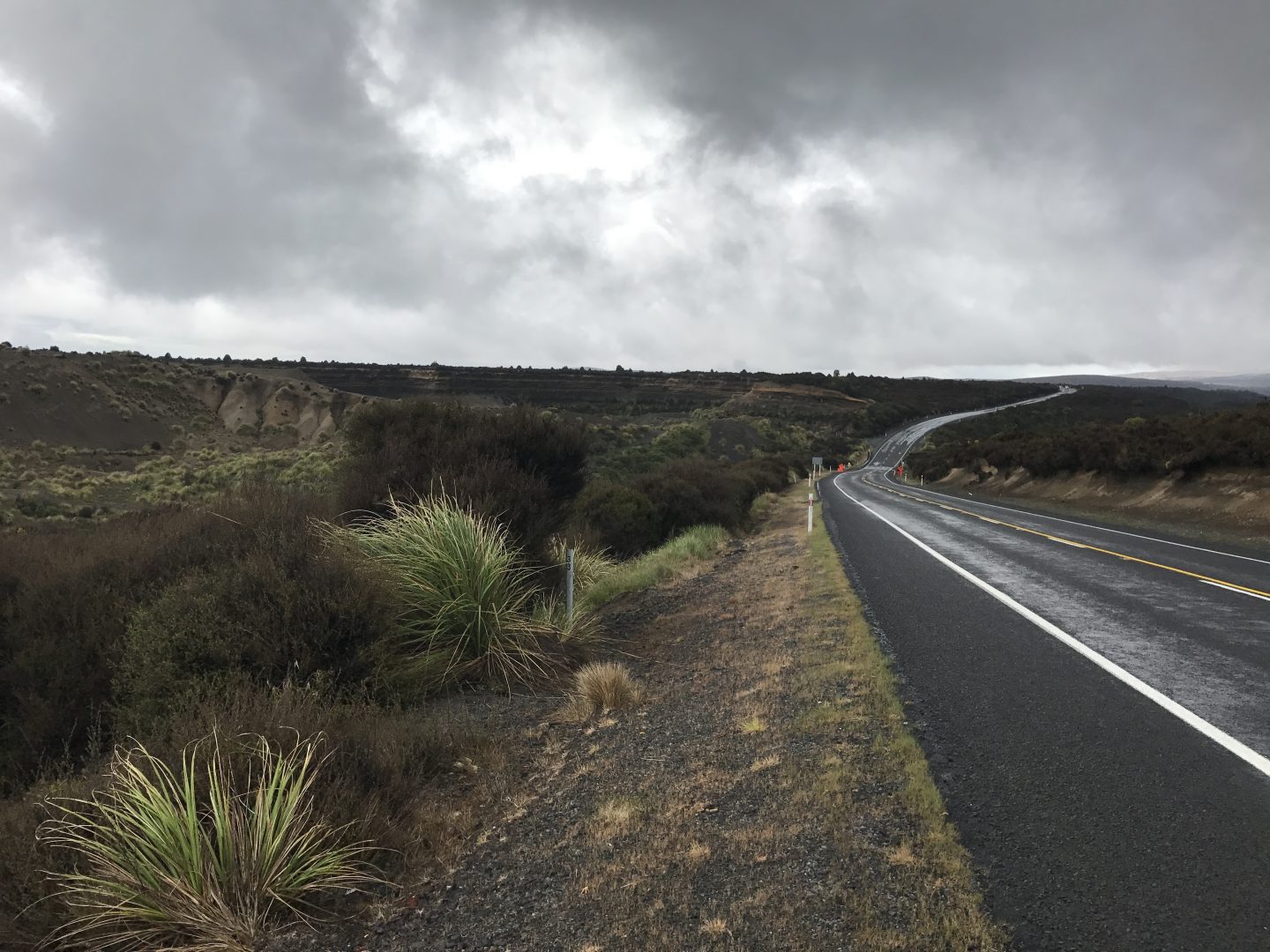 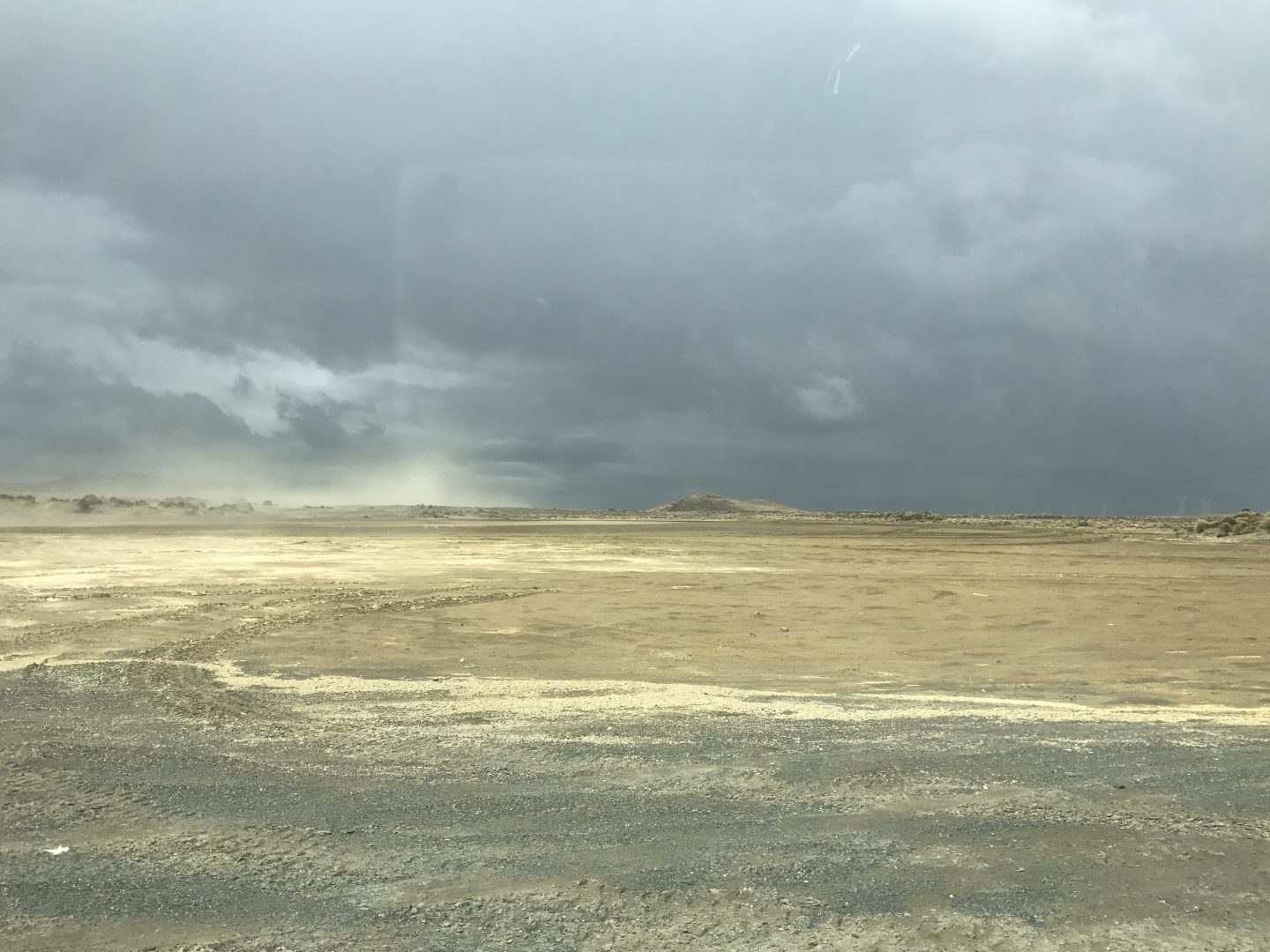 By 3pm we were shattered.  We found ourselves on Waitarere Beach and after finding we could drive along it we stopped the car on the sand.  Turning off the engine, we tilted the seats back as far as they would go and set an alarm.  Within moments we were both sound asleep.  And moments before the alarm went off we both awoke, ready to crack on to Wellington. 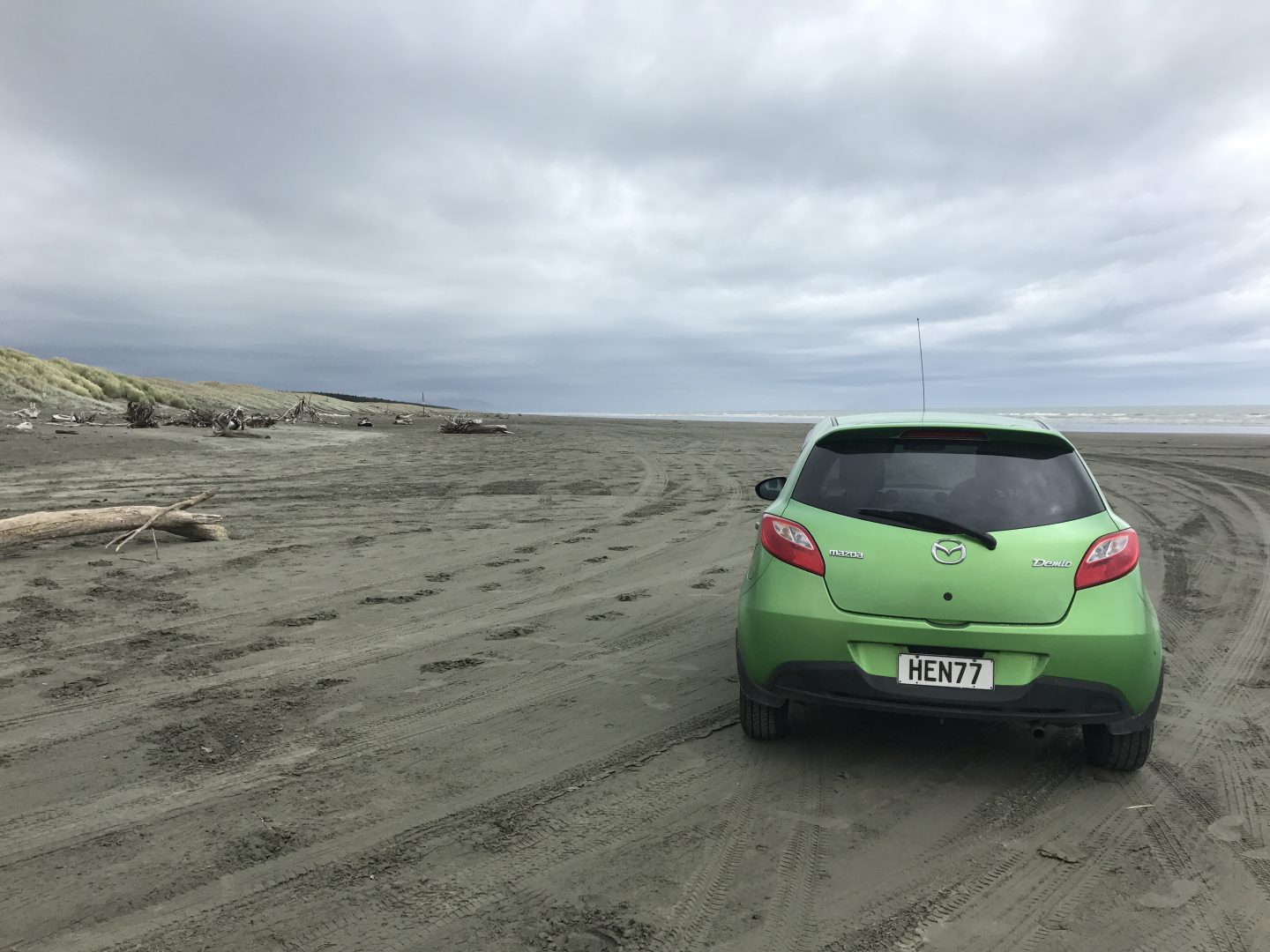 As we neared Wellington we hit a small bit of rush hour traffic, but nothing that brought us to a  stop.  We reached Rosie’s just after 5:30.  Claudine joined us a short while later.  This super excited happy snap was taken just after that, over two years after we had last been together.

We spent the evening enjoying fish and chips, wine and beer and a lot of laughs. 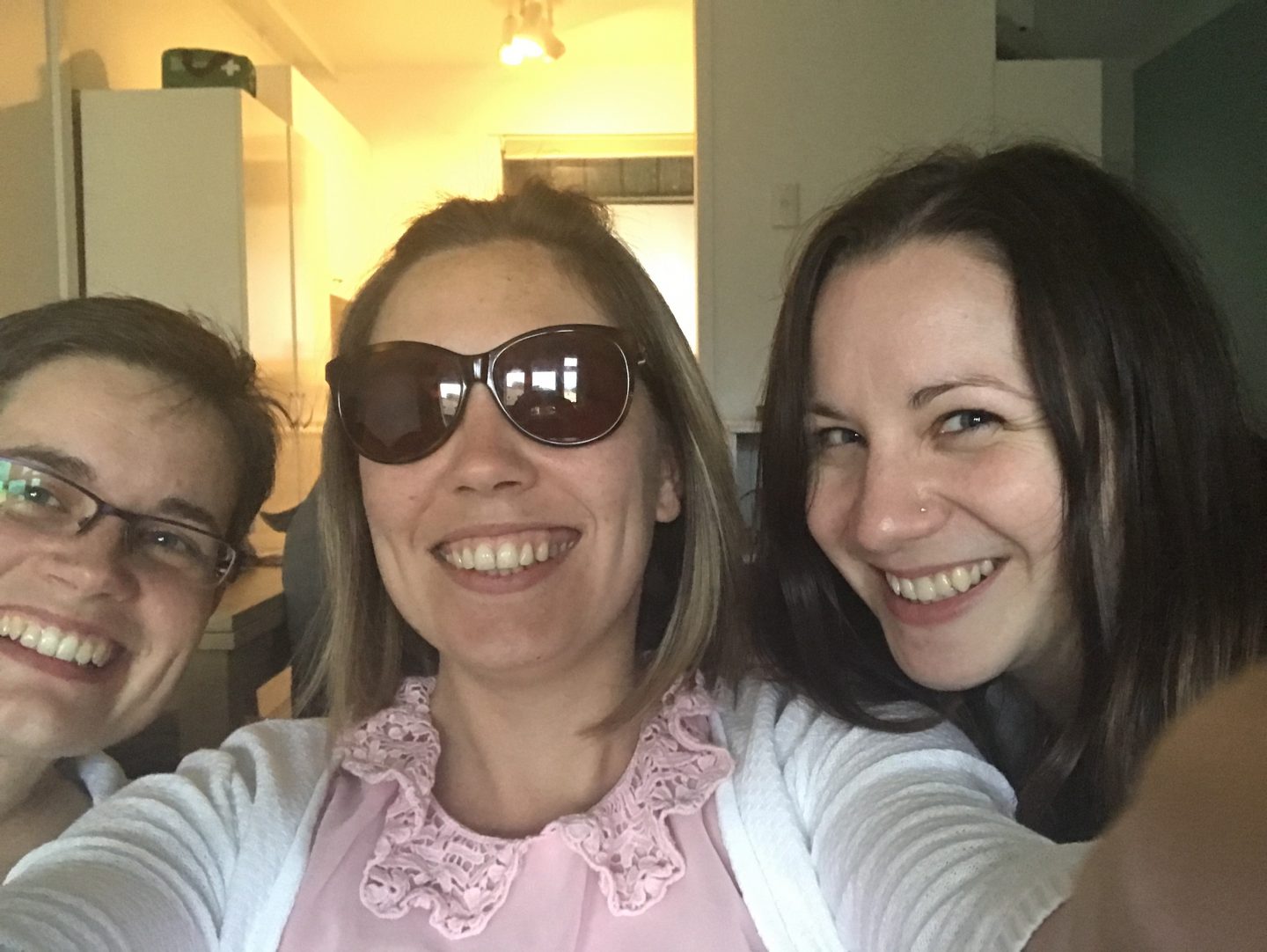 After a good catch up, Saturday morning was a lazy start.  After picking Claudine up, we set off for New Zealand National Museum, Te Papa Tongarewa.  We’d had a couple of recommendations to visit this free museum so i  Our lazy start continued by stopping for coffee and lunch before we saw even one exhibition. 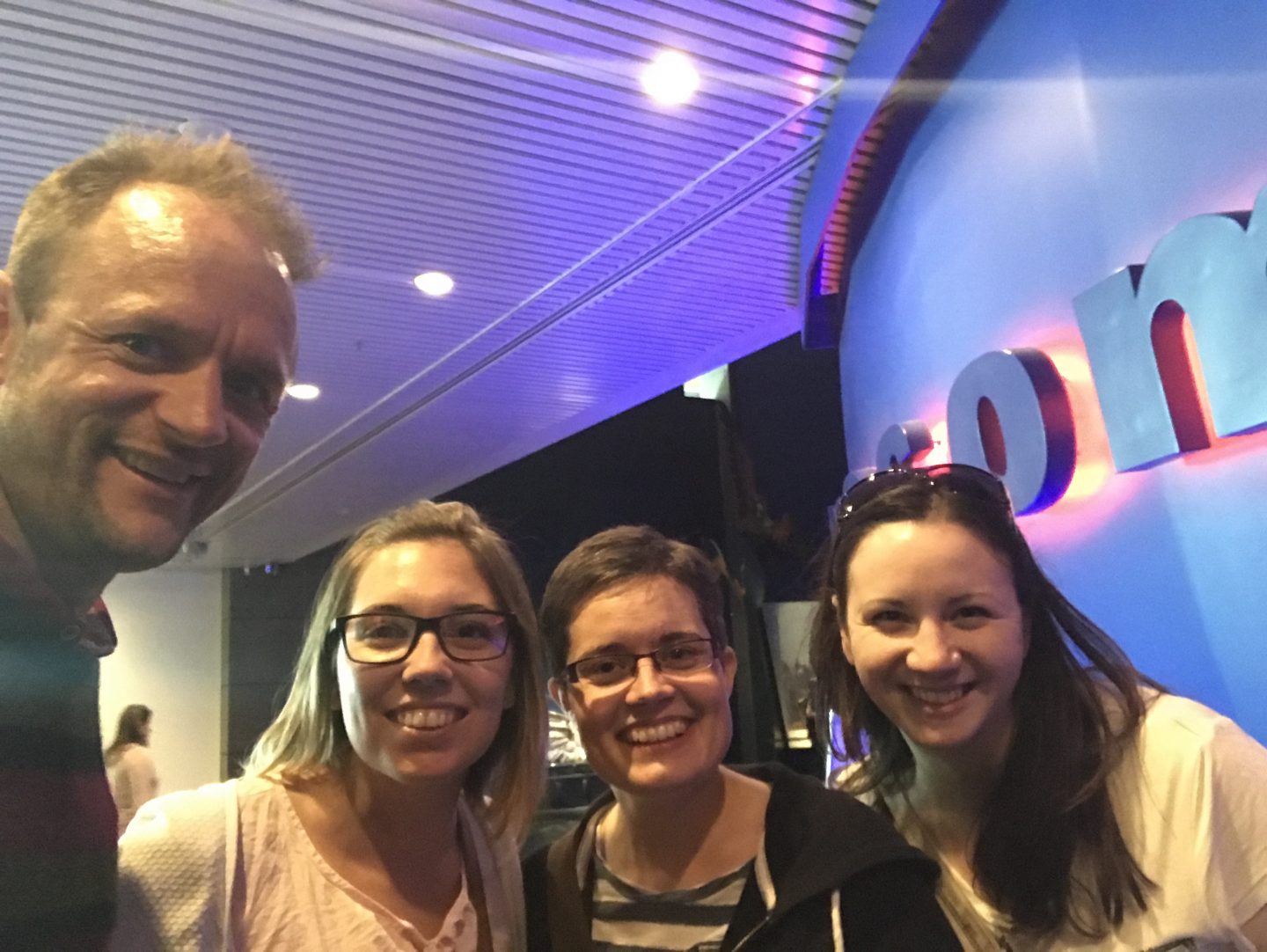 ‘Gallipoli: The Scale of Our War’

After a leisurely lunch in the Te Papu museum cafe, we got into the queue for the Gallipoli exhibition. Rosie & Claudine had both already seen the ‘Gallipoli: The Scale of Our War’ exhibition and raved about it.  They were right.  It has to be the most incredible exhibition I have ever seen.

At the heart of the exhibition phenomenal oversized statues of real people who fought in WW1 at Gallipoli told the story of how the Anzac troops were overwhelmed by the Turkish and German troops.  The Exhibition made the hairs on my arms stand on end.  They matched the hairs which stood on end of each of the models at the exhibition.  It was amazing how much detail these contained, right down to tears! 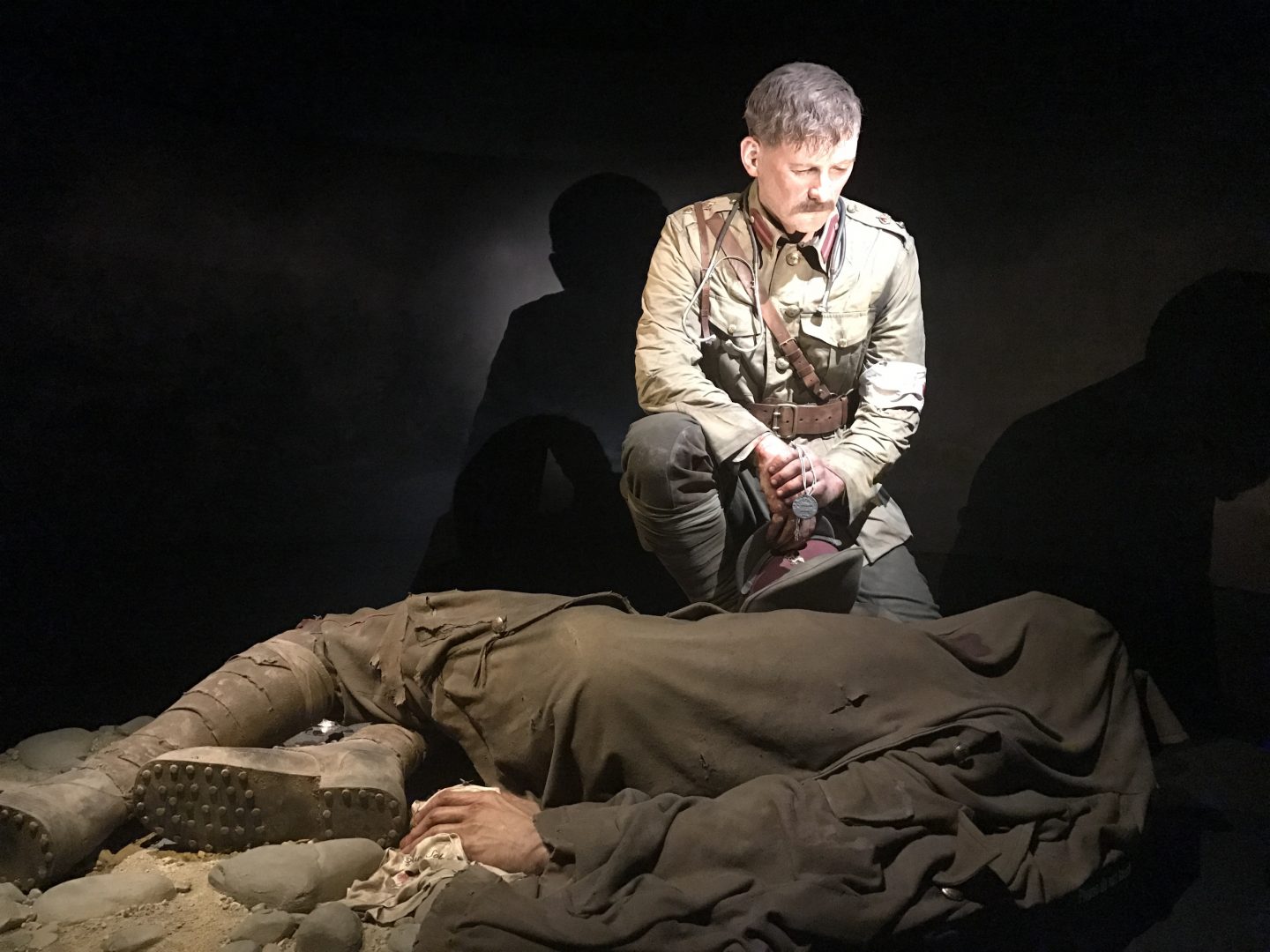 You can read more about the amazing Gallipoli exhibition on the Te Papu website.

We also explored some of the other areas of the museum, including an earthquake simulator, before Rosie took us on a drive around Wellington.  After more coffee, we went home for a nice home cooked meal (such a treat when travelling!) which was washed down with more wine!

Our final day in the North Island saw us visiting Mount Victoria.  True to its reputation, Wellington was windy, and as we made our way to the viewpoint at the top of Mount Victoria we were almost blown away.  The views across Wellington were wonderful, though. 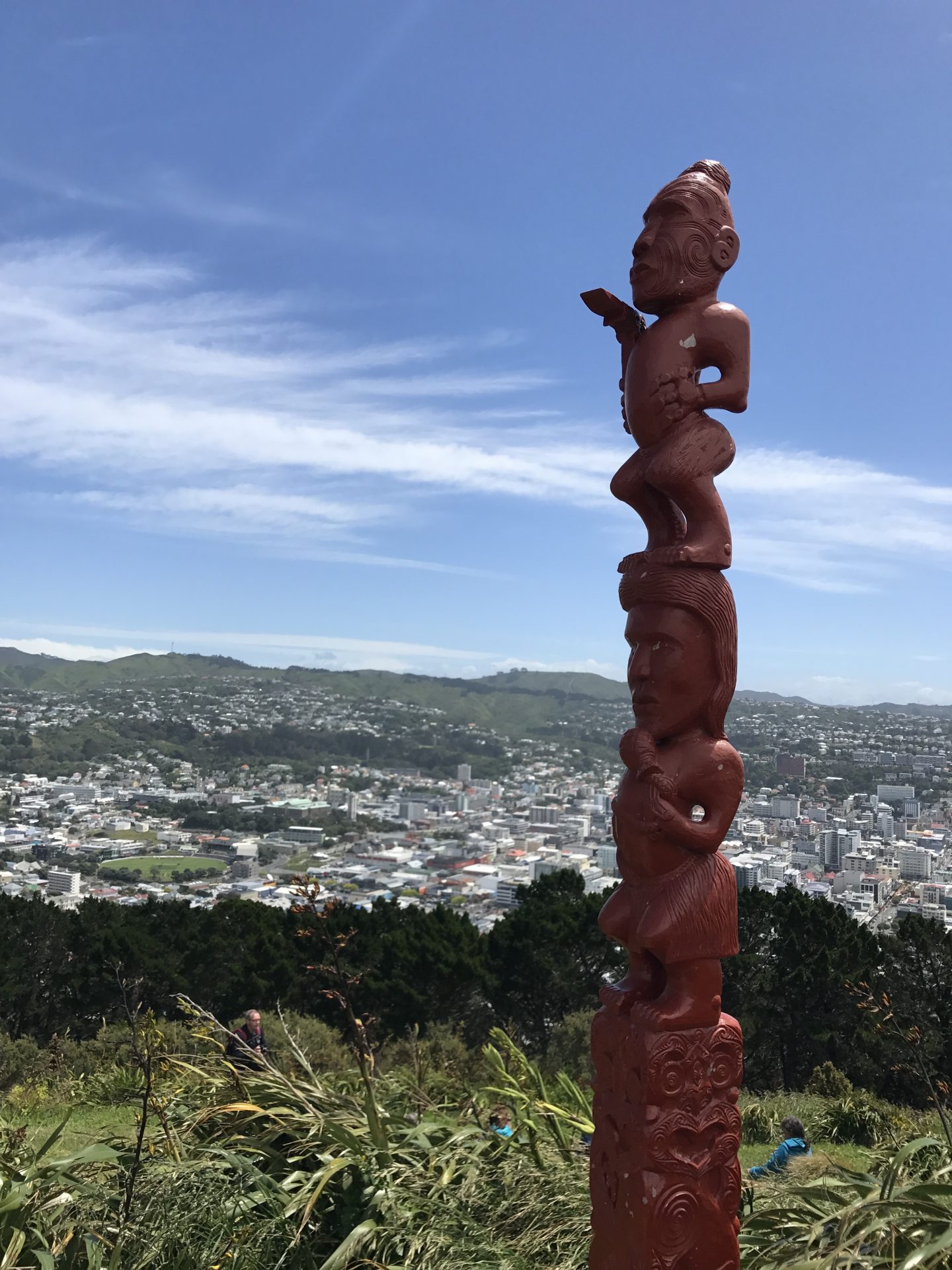 After lunch, we took a trip in the Wellington Cable Car.  Yet again we were afforded with incredible views over the city.  It was a lovely end to our first visit to the North Island and the first part of our New Zealand Road Trip. 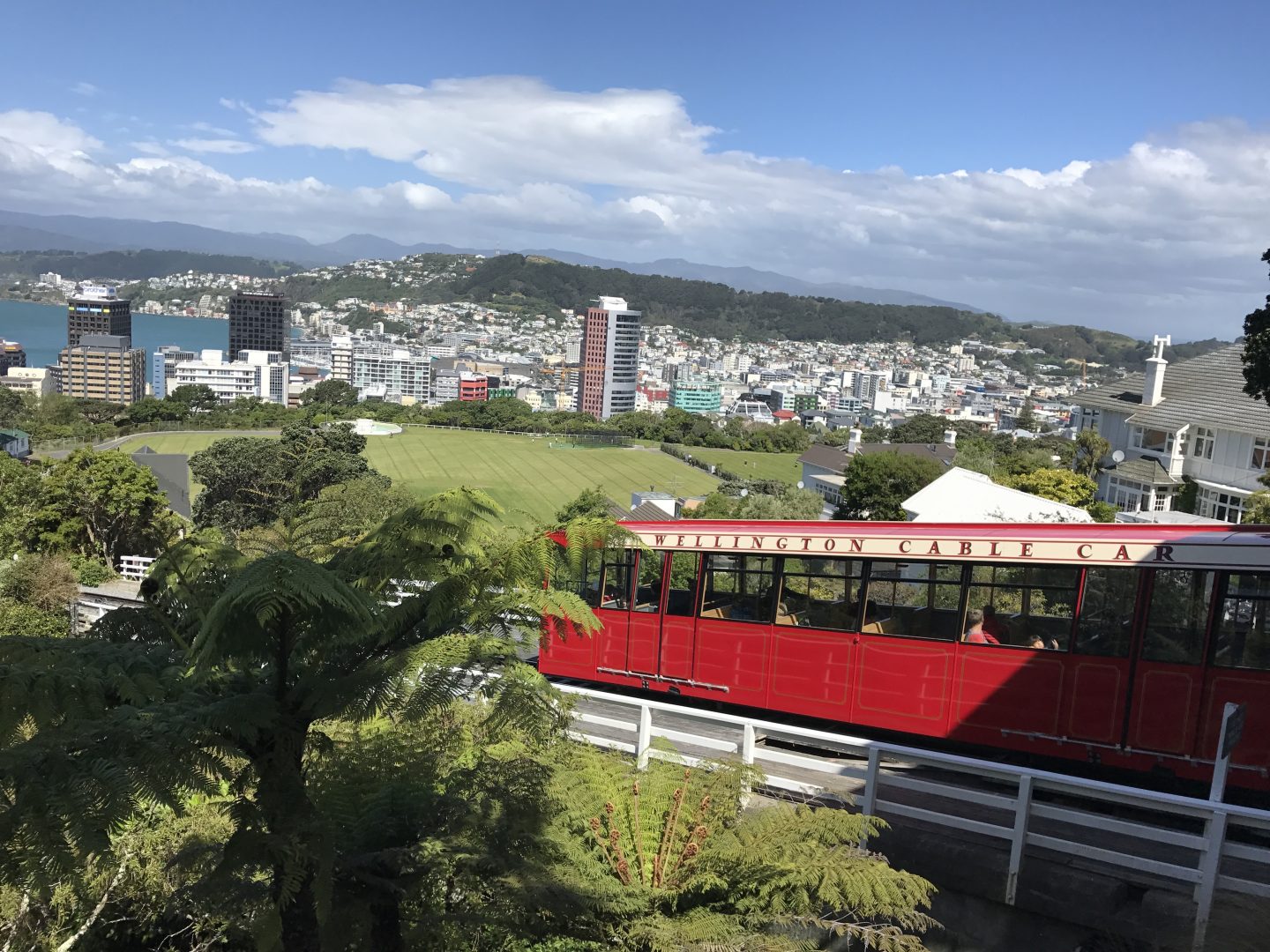