After a wonderful few days in the North Island, New Zealand, we hopped on the Wellington to Picton ferry and made our way to the South Island.  We had 10 days to explore more of the beautiful island which we had last lived in over 10 years ago.  The ocean had been pretty choppy all day and I feared that my sea sickness would be in full effect.  Fortunately, we didn’t actually feel too much sway on the boat, despite the fact an aftershock hit just outside of Picton whilst we were making our way over.

We had a good sleep at our comfortable airbnb and left Picton bright and early.  It may have been rush hour on a Monday morning but we passed few other vehicles.  We were heading to Christchurch and hoped to visit Darren’s elderly Great Aunt, Molly.  We had last spoken to Molly in 2011 after the earthquake and had since lost her number so hoped she would still be in Christchurch.

Our original plan was to take the coastal road to Christchurch and travel past Kaikoura.  Sadly, due to the earthquake a few weeks prior we would need to take the inland road.  Turns out this wasn’t such a bad thing.

OFFER: GET £25 CREDIT TO USE ON YOUR FIRST AIRBNB RENTAL

We instantly remembered why we loved the South Island of New Zealand so much.  It’s the most beautiful place in the world we have visited to date.  We started our journey south by driving through the Marlborough Wine Region. 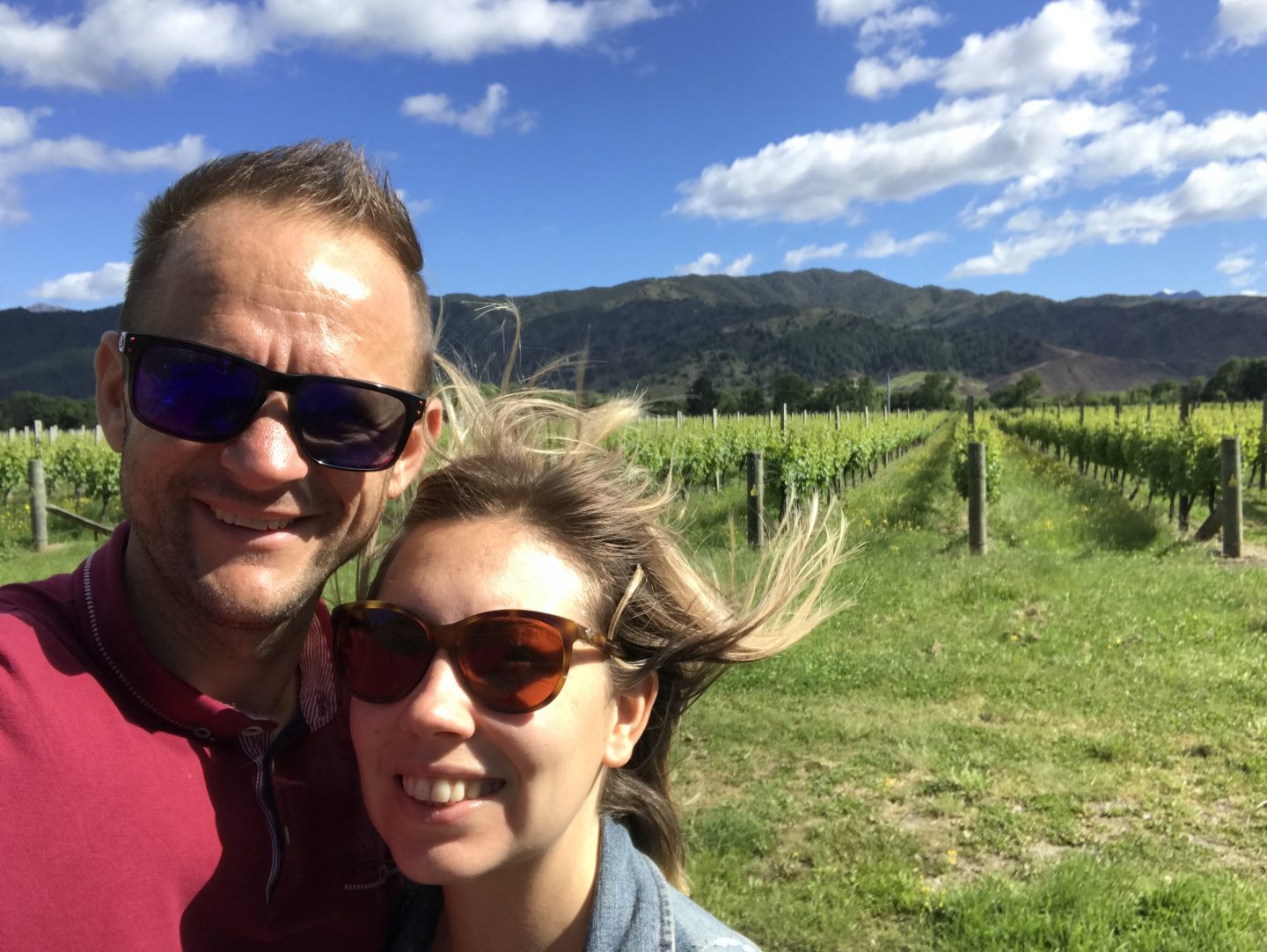 As we carried on South it started to get a little grey and drizzly.  We stopped at Lake Nelson to take some snaps before carrying on. 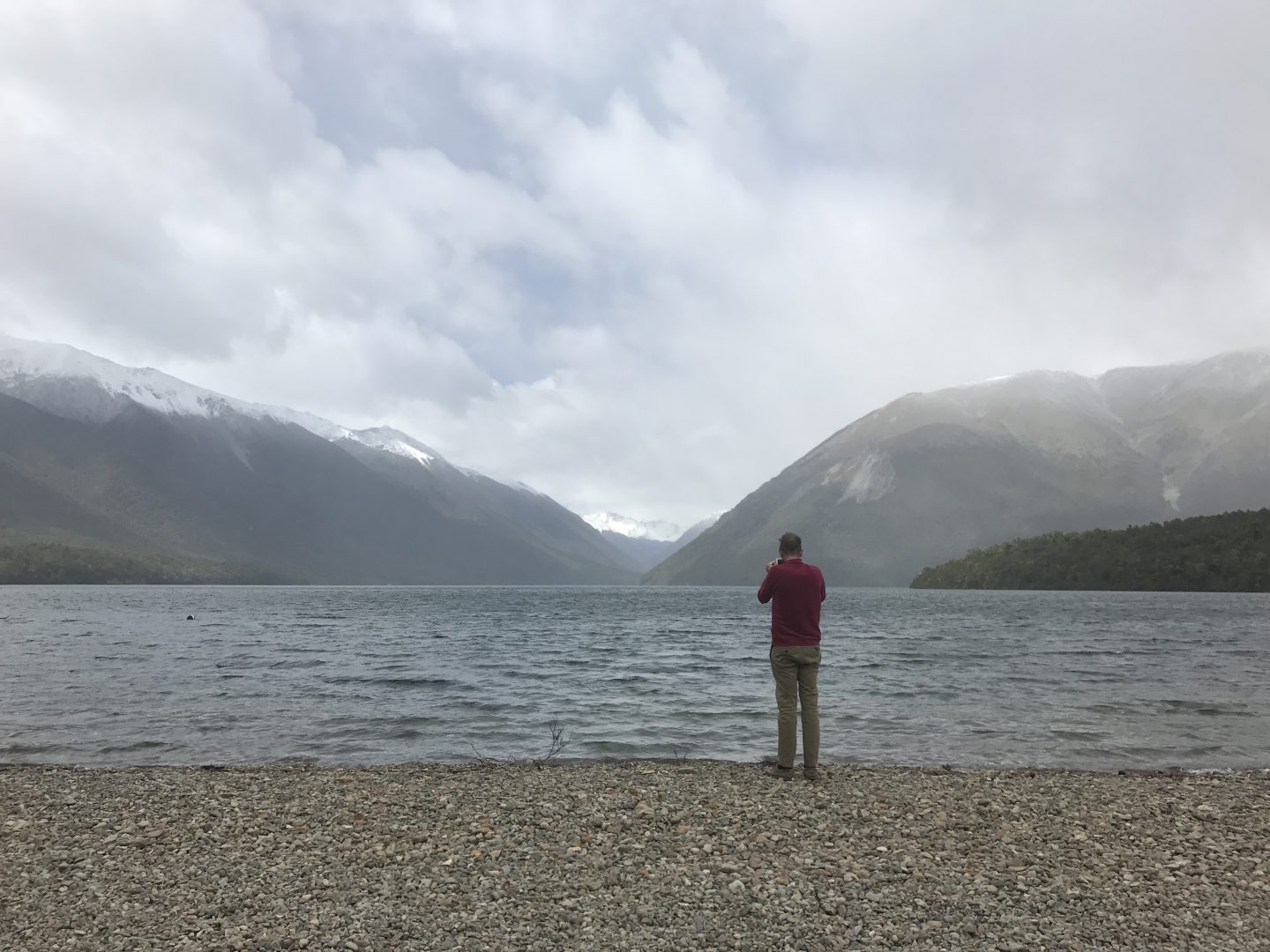 The weather started to improve as we reached the Populars range. 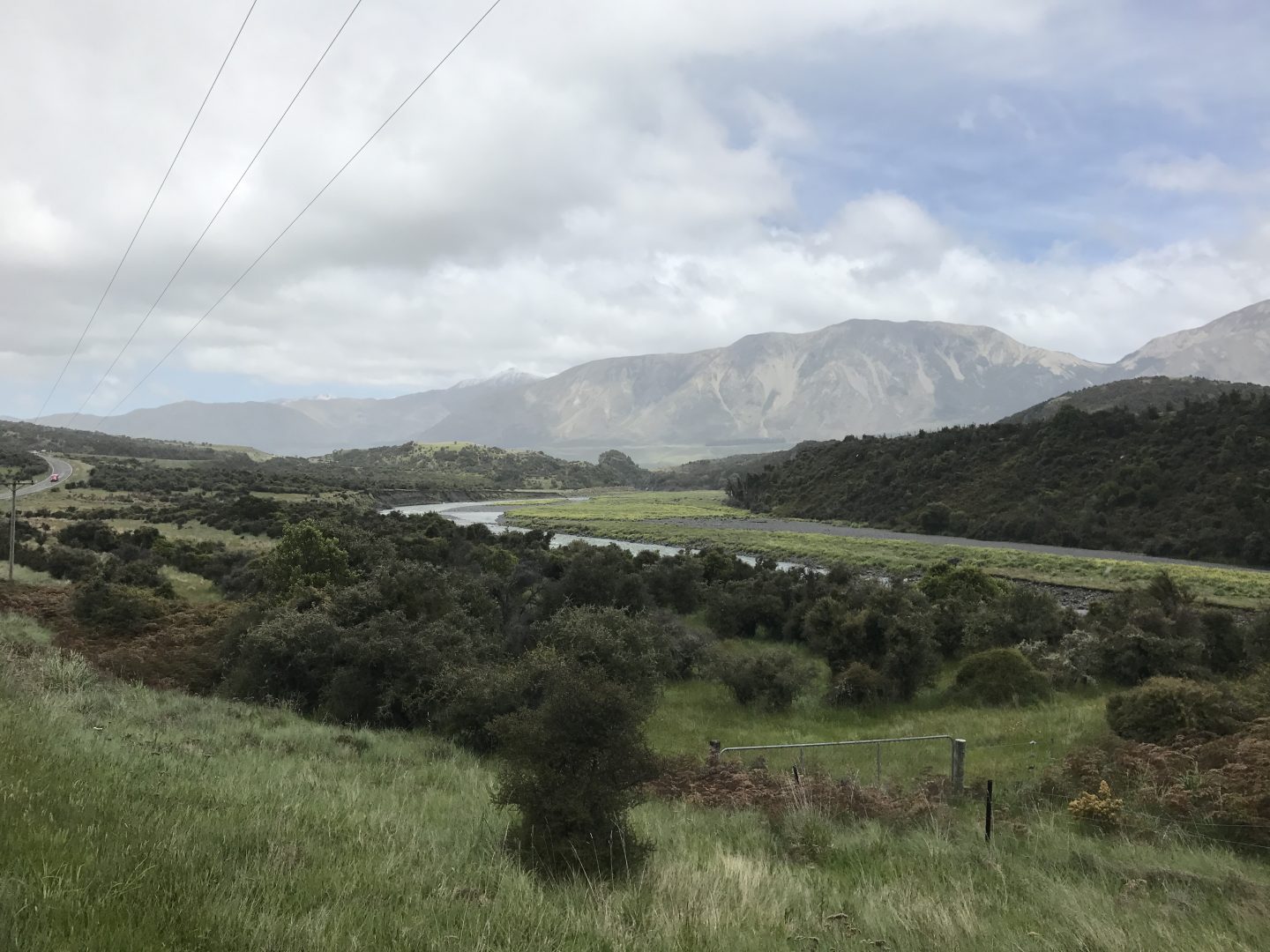 We stopped so many times along the way, including here at the Island Hills.  It’s amazing we covered any ground at all! 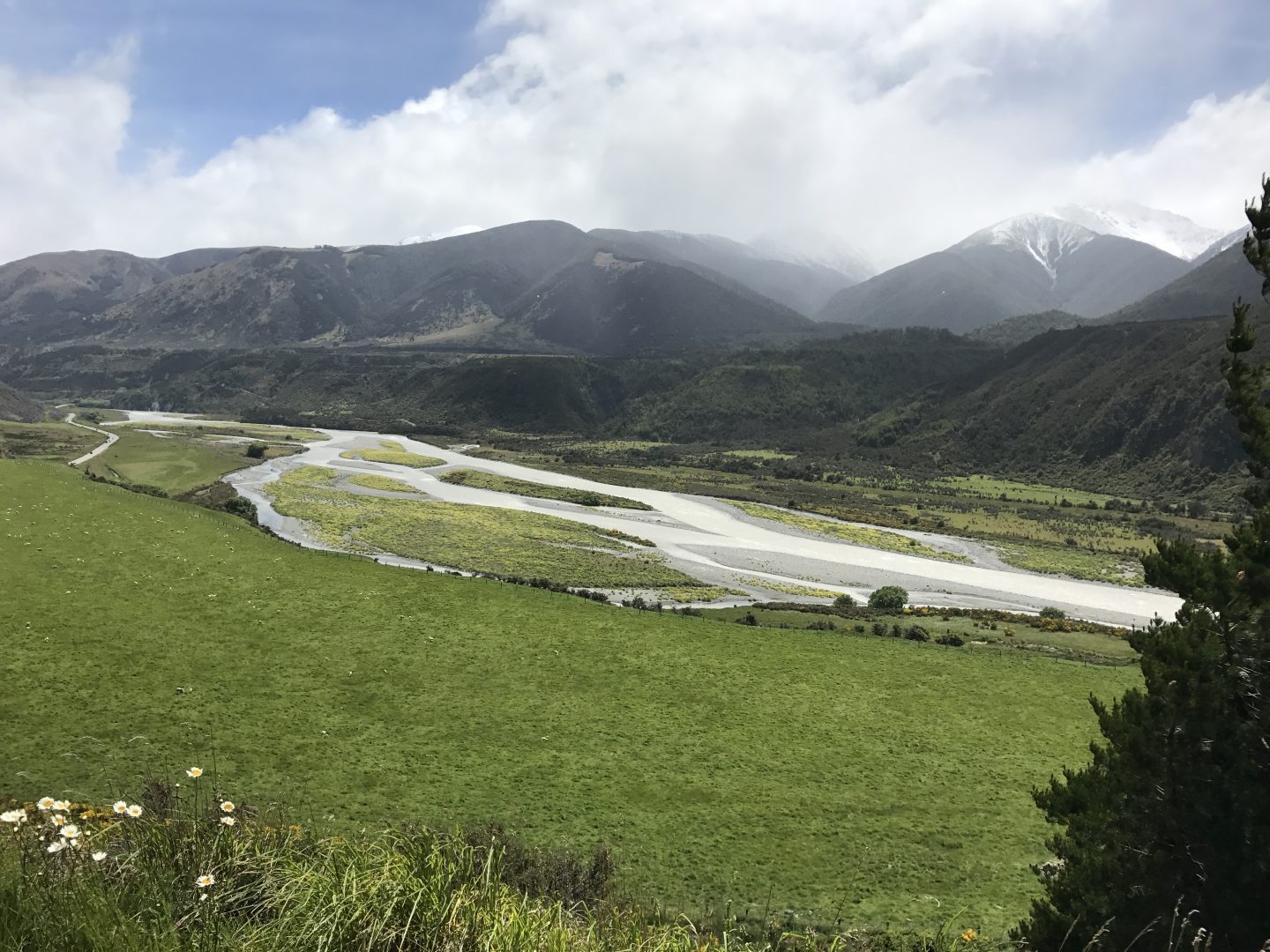 We spotted a sign for Maturia Falls and took a little detour.  Perhaps not as magical as Huka falls in the North Island it was still very beautiful, and a little walk helped stretch our legs. 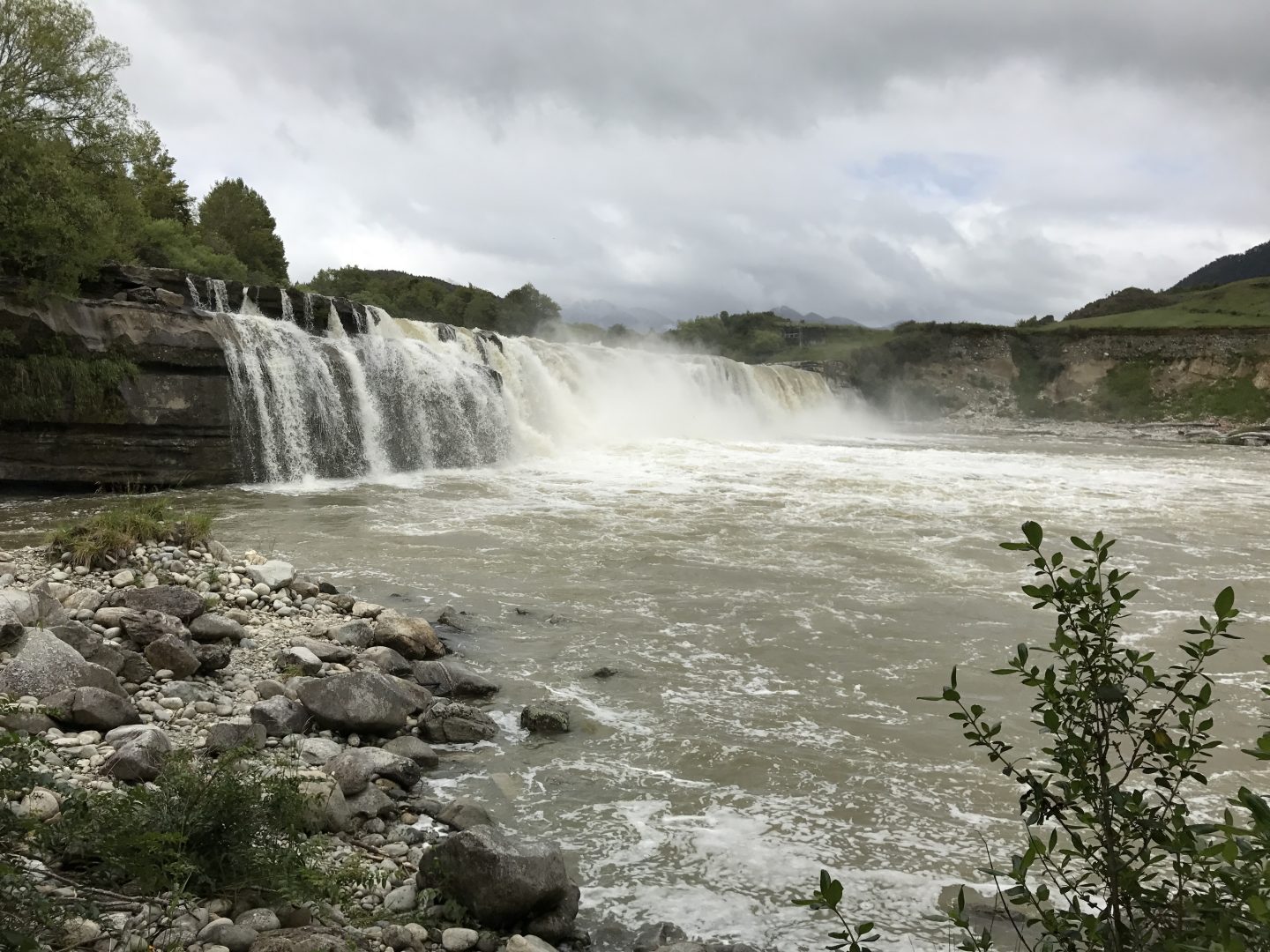 We reached Christchurch by mid afternoon.  Our sat nav was set straight to Great Aunt Molly’s house.  It was an address we remembered off by heart.  Only when we arrived we couldn’t find Molly house and I wondered if we had selected a road with the same road.   I could have sworn that Molly lived in a residential area and not right next to a huge park.  We found number 27 but it definitely wasn’t the brick-built home that we remembered staying in for weeks.  Driving up and down the street we wondered if we had perhaps remembered the door number wrong.  We hadn’t.

Following the 2011 Christchurch earthquake, the village of Dallington where Molly lives is now classified a ‘red zone’.  It means that an entire expanse of the village has been flattened due to the danger of it flooding following the rise for the river bed.  The land in which Molly’s house stood is one of about 20 plots which could remain on the road.  The house however was so severe damaged that it needed to be rebuilt.  The brick bungalow we were looking for no longer exists.  We found Molly in a very trendy looking new build.  We were thrilled that she was still here.

Within moments of our arrival we were sat around the table with coffee and cake.  It was exactly as I remember happening when we arrived unannounced 10 years prior!

As ever, Molly made sure we had a big breakfast before we set off on our journey to Queenstown to meet my cousin, Dale.  On the way down, we planned to stop in Fairlie, the village we had lived and worked in back in 2006, and drop in on our old Landlord, Graeme, to say hello.

As we made our way to Fairlie we stopped at Ashburton Holiday Park to reminisce.  It’s a place which holds awesome memories for us.  We remembered staying here in one of the coldest winters in years, in a caravan in -17 degree temperatures with no gas or electric due to power cuts.  During our stay we met a great bunch of travellers who all worked on the farms and in the dingey lily bulb factory with us, and we tried our hardest to remember all their names. 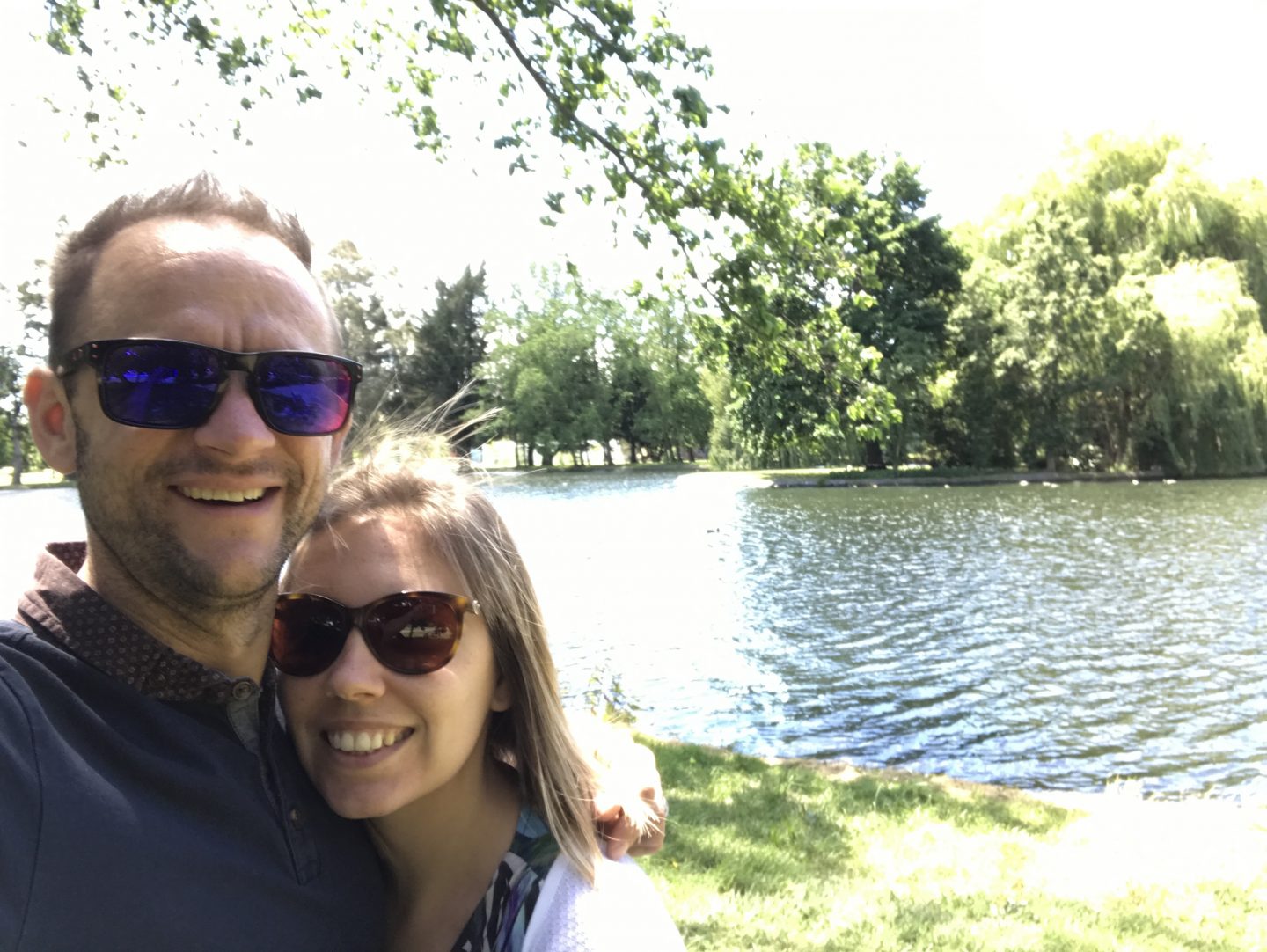 When we reached Fairlie we head straight to visit Graeme.  It took him a few moments to put names to our faces but soon we were sat with a cuppa catching up on the last 10 years, including meeting his new wife, Dawn.  We were so pleased that Graeme was in.  It was a shame we had such a short period of time to catch up, but we’ve promised to call in advance next time we arrive and make plans to go out. 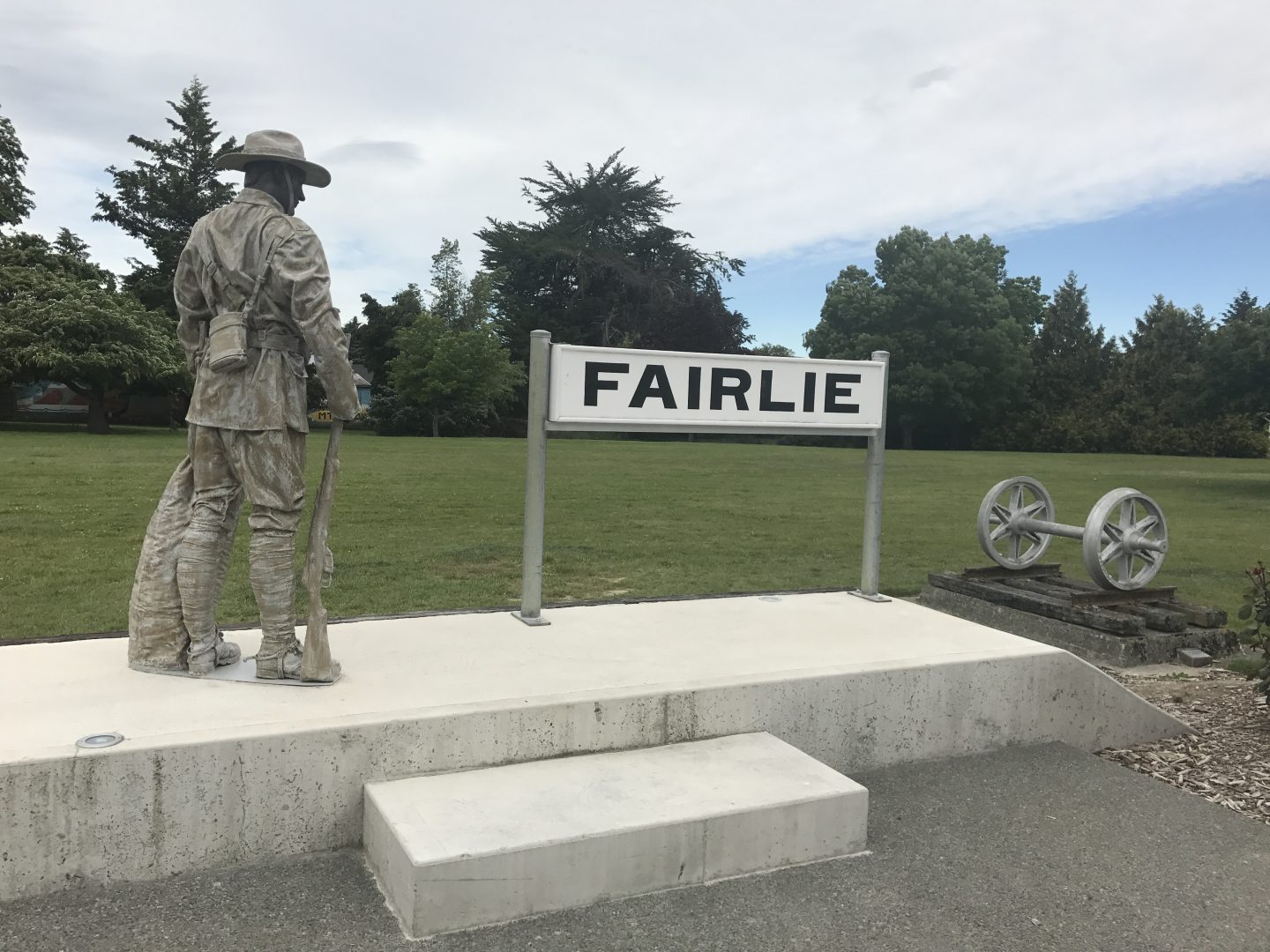 As we continued on to Queenstown we passed Lake Tekapo.  It was our favourite place in the South Island of New Zealand during our 2006 stay.  It’s incredibly beautiful and it’s still one of my favourite places.   This is why: 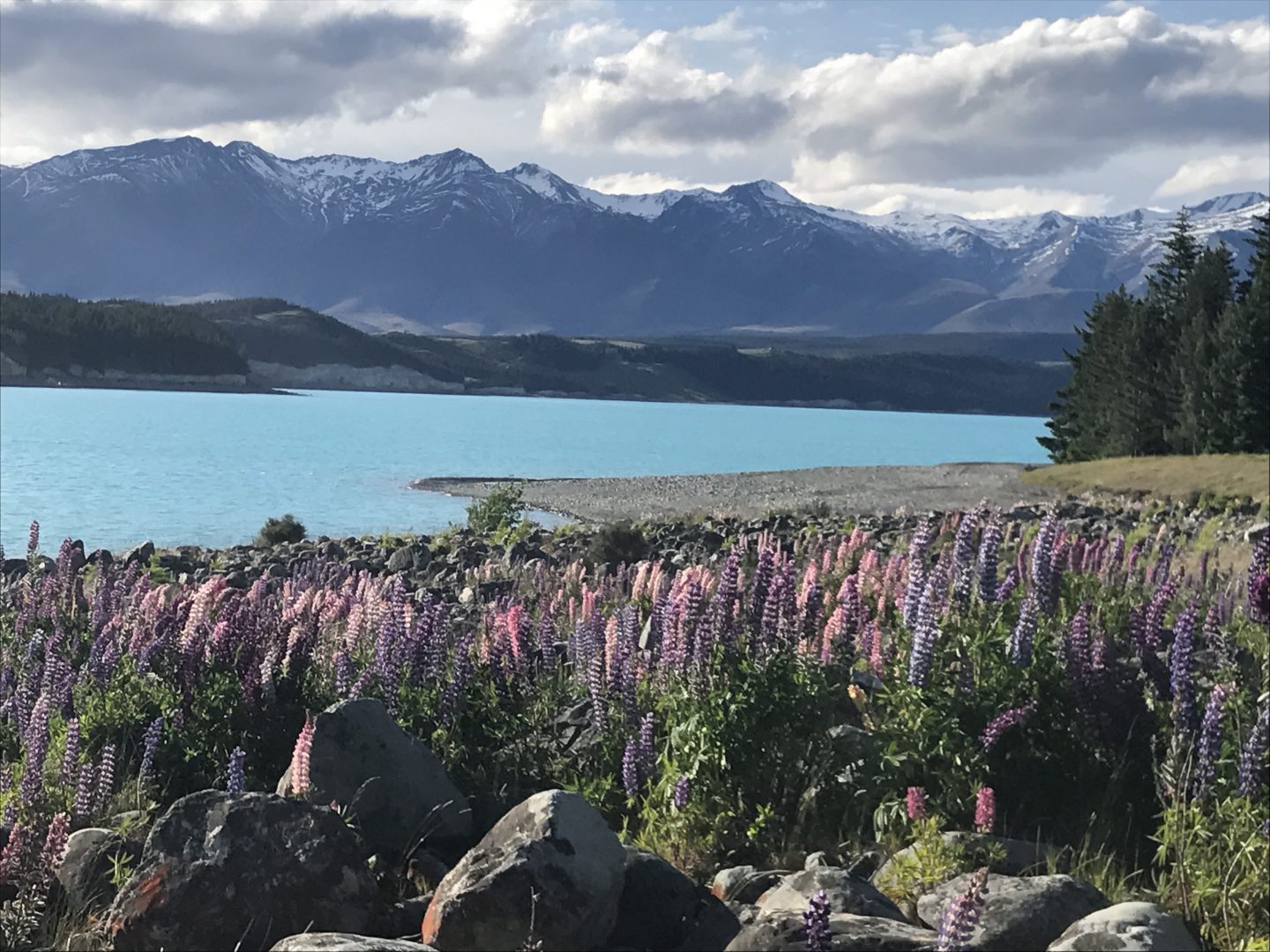 We had hoped to find somewhere near the lakes to stay overnight but despite the residential growth in the town we didn’t see any motels with vacancies in the area.  In the end we ended up driving much further than we anticipated and ended up in Oamaru.

We started the morning with a walk around the historical town of Oamaru and the public gardens.  Our plan was to make it to Invercargill at the south of the island, but we were so tired that made it only as far as Dunedin. 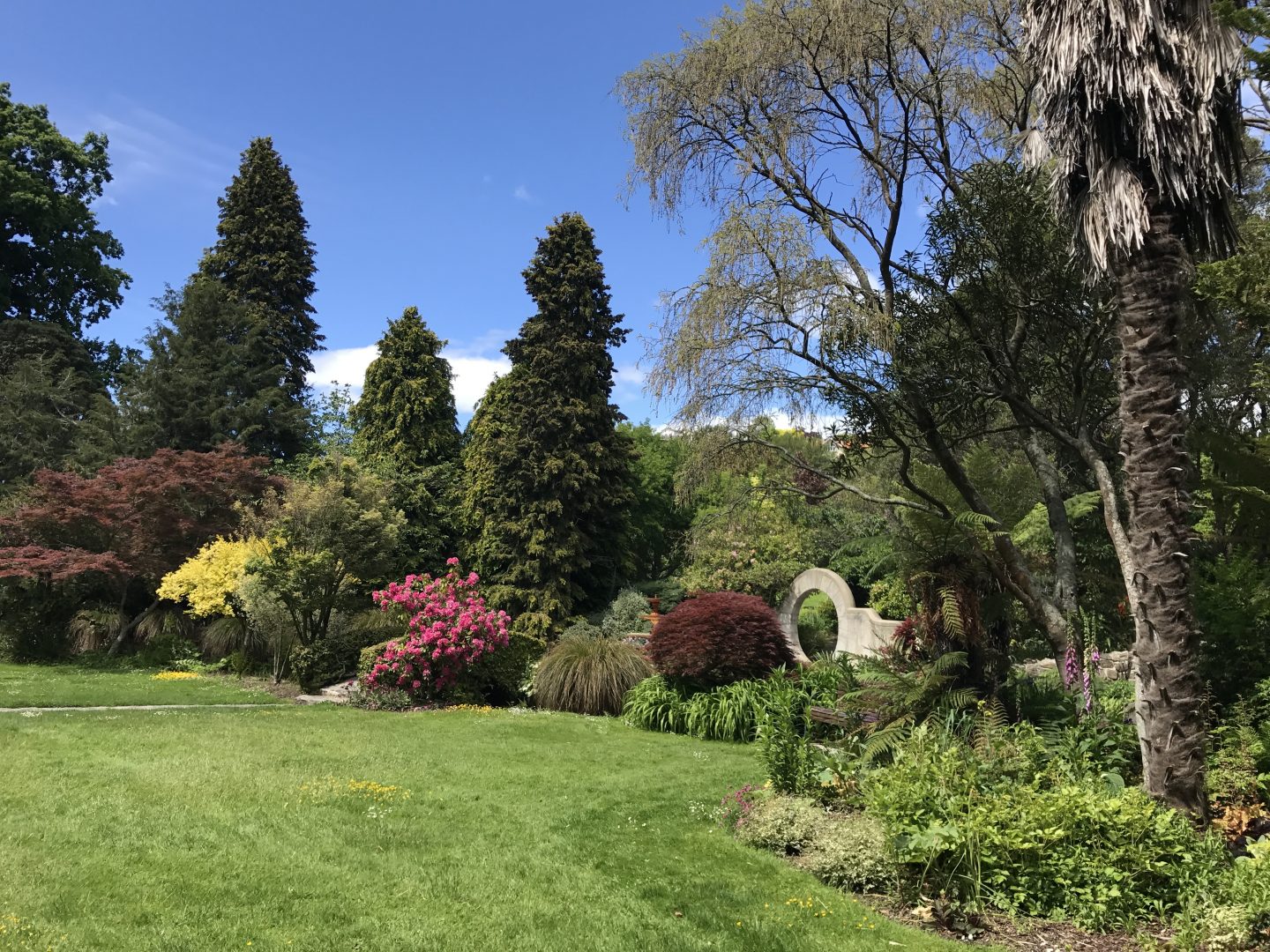 On Molly’s suggestion we head to Moeraki in search of the Moeraki Boulders.  Seems so did everyone else.  Most of the time other visitors were climbing all over the crumbling boulders, but I did mange to get this shot without swarms of people laid over them thinking they were models. 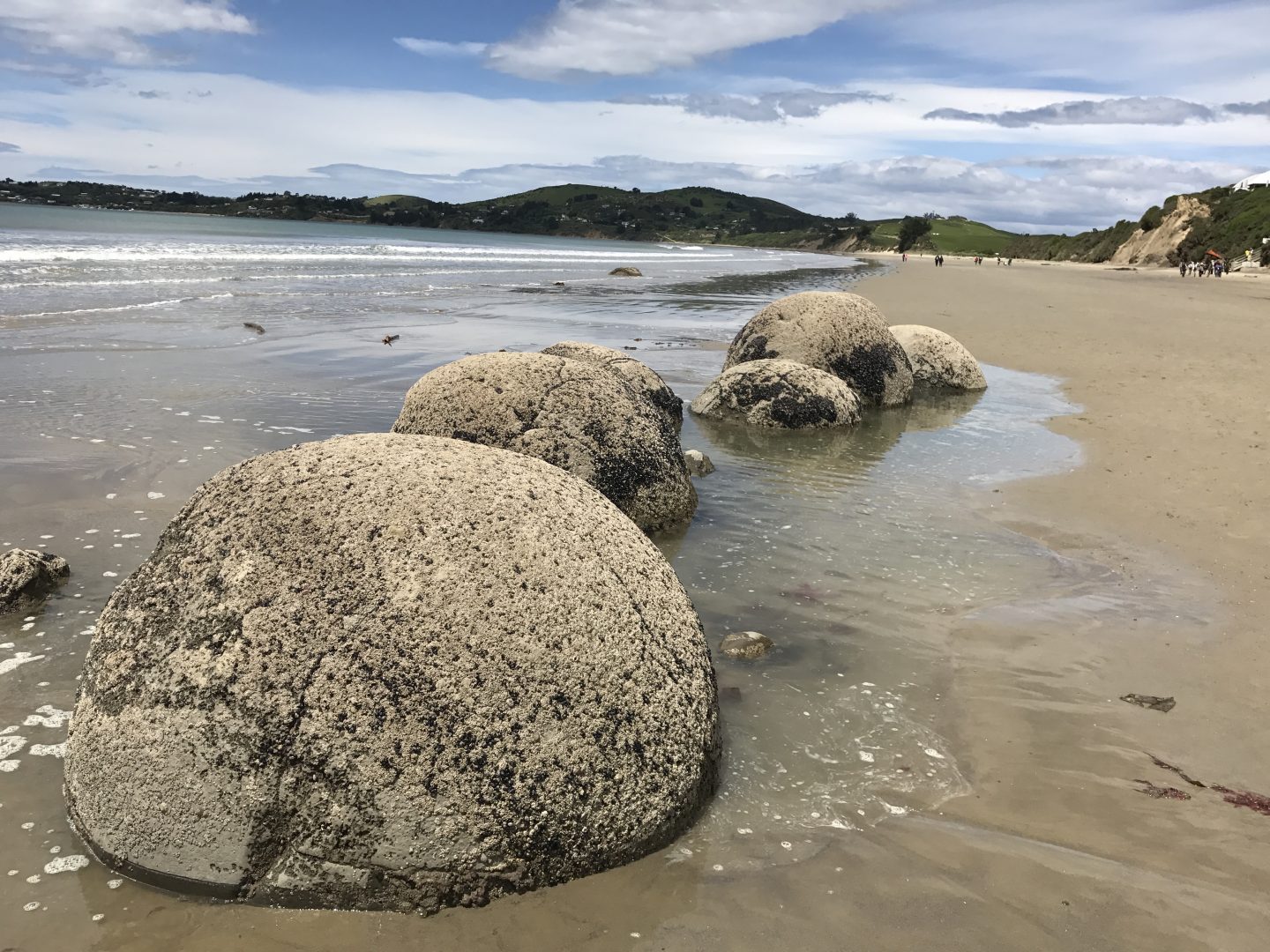 After a walk along the beach, we stopped in at the Moeraki Tavern where we had the most amazing fish lunch.  We washed it down with beautiful New Zealand champagne and took in this beautiful view. 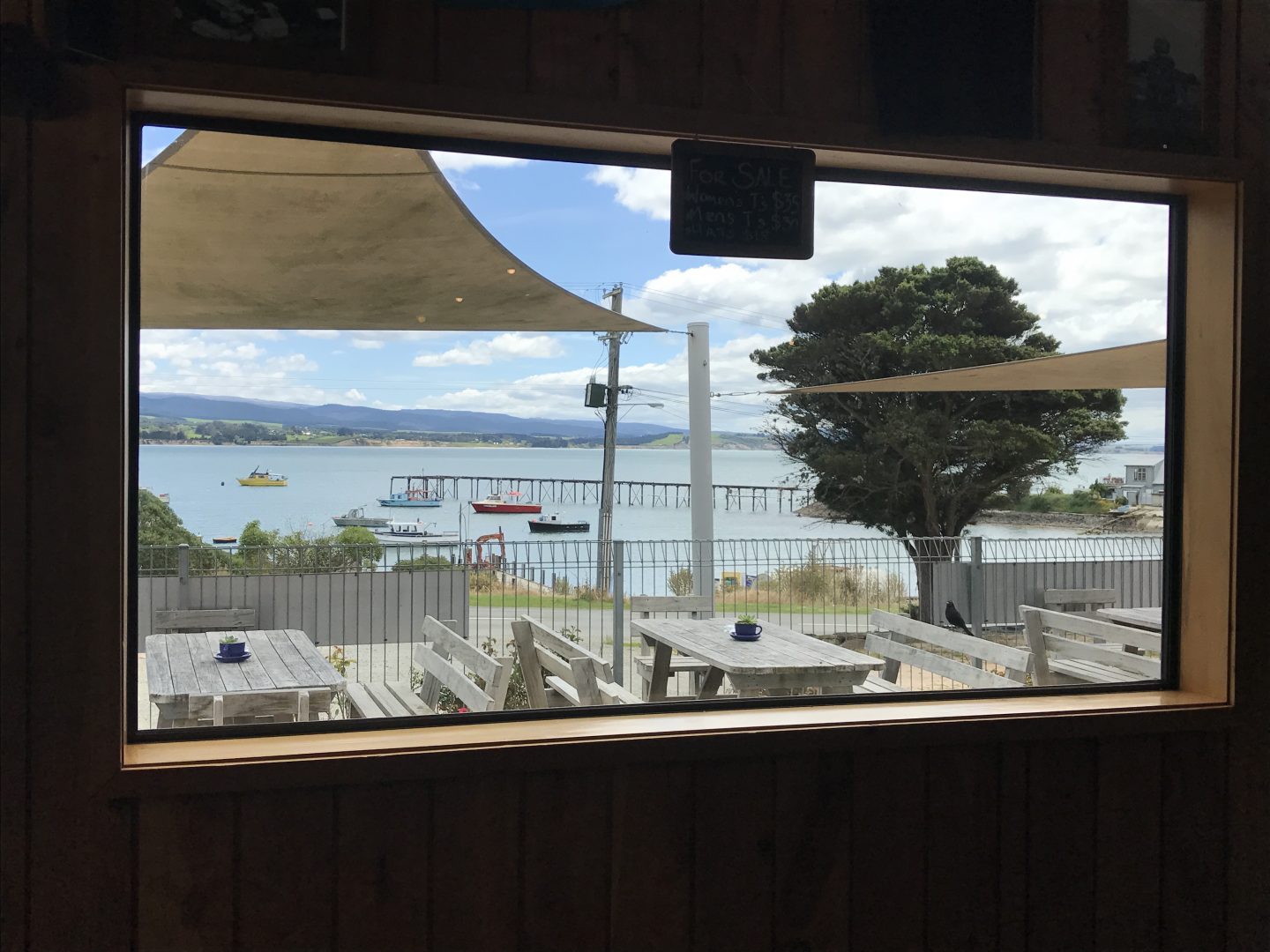 By the time we made it to Dunedin we were completely shattered.  A quick flick through airbnb and booking.com gave us a couple of option.  The first was a lake side cottage and the second a city B&B.  As we already had an airbnb booked near the lake the following day we plumped for the city view B&B.  We stopped and picked up some bread, cheese & wine and decided to spend the rest of the afternoon  relaxing on the balcony and watching the world go by followed by an early night to catch up on some well needed zzzz.

Neither of these things happened.

We ended up staying the night in a drug den.  (And it deserves a whole post of its own which I will publish on another day).  The following morning we set off super early.  Which was a good job.  It meant that we had time to visit Milford Sounds.  And gee, what a place that is!