Le Meridien Suvarnabhumi, Bangkok Golf Resort & Spa opened in 2015. As frequent visitors to both Bangkok and the SPG chain of properties, I was pretty excited for the opening of this particular hotel. Darren & I visited this hotel soon after it opened, and again earlier this year. I thought I was going to love this hotel, but I didn’t. Much of this post is copied from an email I sent to the management after our second stay.

Our first stay at Le Meridien Suvarnabhumi Bangkok was booked when the hotel was open not quite finished. However, this was well advertised and we did not feel that this would impact on our short stay. We booked a Grande Club room, which as part of an opening offer included airport transfers and laundry services. Arriving at the the hotel, we were informed (as we knew already) that the club lounge was shut. There was however an alternative service which would be provided in the Latitude bar lobby area.

Shown to our room, we were instantly impressed – a grand, brand new room was provided with the most wonderful views over the golf course. But, on closer inspection, the room appeared, even in its newly built and opened state, unfinished and a bit dirty. Grout was missing from the tiles, bathrobes were not clean and the windows were really dirty.

Still, the view was perfect, the room was magnificent, and, when we called to order a coffee (and cheekily asked for a biscuit or two) a lovely lady brought them right up. 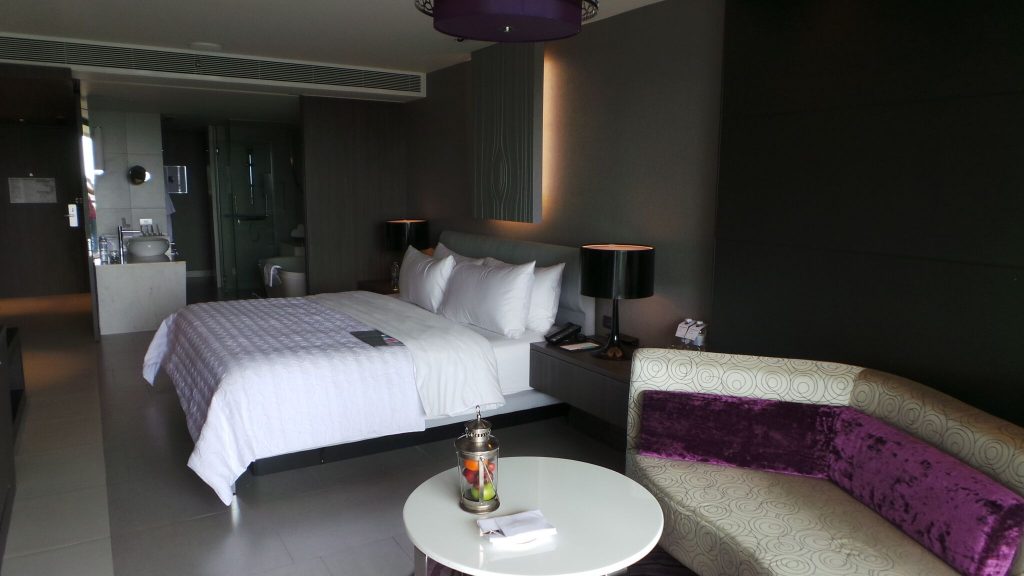 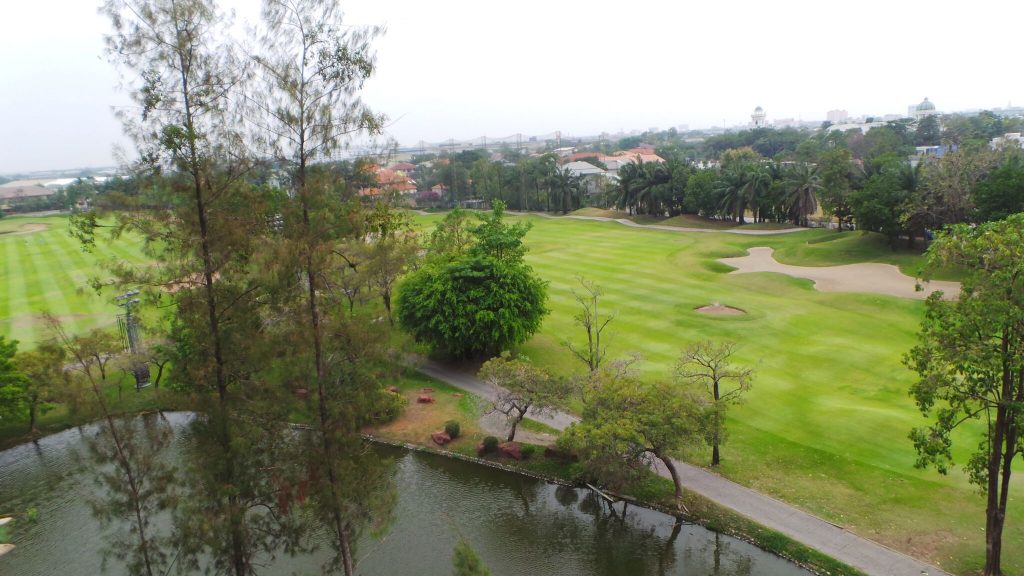 Before dinner, we took advantage of the temporary club lounge room; staff seemed unsure quite what was expected, but were pleasant and helpful nonetheless. There seemed quite some confusion of what we were able to consume – and given a menu we were told we could order what we liked. I questioned this twice, but were told we could order anything. We chose a sparkling rose. Coupled with some tapas, we enjoyed a nice pre-dinner drink. However, when ordering a further drink, we were told this wine was not included and we would need to pay for the drinks already consumed. (Later this was rectified)

After these drinks, we left for a meal at the main restaurant. An evening buffet option was advertised in the Latitude bar at a discount of 30% and we decided to have this meal as our last in Thailand. Our meal was beautiful. After we finished our coffees we waited half an hour for staff to come out (we were seated outside) but no-one arrived. With our card already swiped on check in, we decided to take a short walk around the golf course to burn of some of the weeks worth of calories we probably consumed. After a while, two staff cam running after us, shouting at us for not signing the receipt. I actually felt like a criminal! On closer inspection of the bill, there was no discount. As it turns out, this option was only available for pre-purchasing a discount coupon, which was very misleading.

As our room rate included laundry, we had sent a couple of items to be cleaned as soon as we arrived. After travelling for over a month, we relished making the long journey home in clean clothes. On check out, we were charged over £30 for the cleaning of a dress, cardigan, shirt and jeans! We were then told that the laundry needed to be sent for cleaning prior to the 12pm (which is after the available check in time for the hotel). The welcome letter we received on arrival clearly stated laundry was included but despite numerous staff reviewing the details, the charge remained. We seemed to be having a few problems with excess charges…

Following our stay at Le Meridien Suvarnabhumi Bangkok hotel we left feeling quite embarrassed and stressed. The feeling that the hotel was looking for any way to make money from the guest was quite apparent – and after staying at many, many hotels in Thailand, I have never felt so relieved to be leaving. Our stay was the worst I can remember from 10 years of frequent travel. I resolved never to return.

However, the hotel is conveniently situated, and really beautiful. Sat at Heathrow airport earlier this year with no plans on what to do when we arrived in Bangkok until the following morning, Darren, and the twitter social media team for SPG persuaded me to return. After all, another year of training and experience would surely improve this hotel, wouldn’t it? 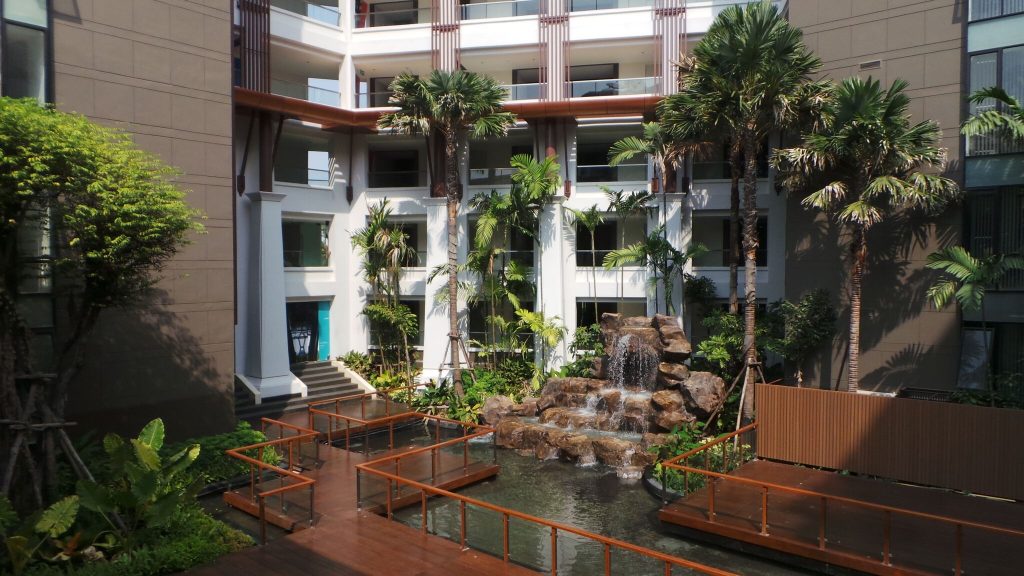 After 30 hours of travel, we arrived in the centre of Bangkok at Le Meridien Bangkok – it seems taxi drivers genuinely have no idea where the airport hotel is. I wished then that we had booked into St Regis – after all we were now halfway to the domestic airport lounge we needed to be at the next day, and we now had to retrace our weary journey.

Arrival at Le Meridien Suvarnabhumi Bangkok was pleasant. I had already resolved to forget the first experience and treat our stay afresh. The check in receptionist asked for help to change our room, and we were offered a welcome drink as Gold members (which I had not expected).

As we were escorted to our room, which I think had been changed to a higher floor. I didn’t immediately recognise the dirty surroundings. My husband did.

At our room, the receptionist checked the room was ready before we entered. However, she missed the rubbish, crumbs and large piece of processed cheese, old receipts, dirty bath and smeary windows. We actually laughed.

one of many hairballs on the corridor

Opening the door, Darren showed me the dirty corridors that I had missed. We called down to reception. After a period of miscommunication, the staff realised that the room was dirty and asked if we would like to move. We were moved to a Grande Suite, but even that was not as clean as I would have expected.

It’s a pretty swish room though!

Tired, we went for our complimentary drink at Latitude bar.  We were given one drinks menu, had that taken away, swapped for another and then given the old one back.  Then we even had to explain the drinks voucher. Still we enjoyed a pleasant drink before a wonderful dinner at Favola.  (The staff and food here are awesome!)

So tired and underdressed – but the bubbles gave me a little boost!

The next morning, we went for breakfast. Four people checked our room number before we were finally told that our room rate was not inclusive of breakfast (which we already knew) However, had I have realised that for £35 we would be eating a stone cold cooked breakfast, I wouldn’t have bothered wasting my time (looking for a clean plate), or my money.

As we checked out of the hotel and made our way to the airport, I was really disappointed that our second stay was as bad as the first.  Despite the gorgeous hotel and surroundings, convenient location, and good facilities,  cleanliness is a real issue at this brand new building.  It appears that training and management needs to be improved upon to make this hotel match hotels of its calibre in the rest of the brand.

The response I had from my email was that our next stay would be upgraded to a suite.  It wasn’t really the reply I had hoped for.  I later asked for a refund for our breakfast and was told I could have this, but 6 months on it still hasn’t arrived.

I paid for the stay with points collected over the year to treat ourselves during our travels – I wish I had used them for a couple of extra nights at the Le Meridien Hotel Chiang Rai Resort we stayed in a few days later.  Le Meridien is generally such a great chain of hotels.  I do hope this hotel sorts it self out, soon!

If you’re looking for a great hotel in for your stay in Bangkok, Plaza Athenee, A Royal Meridien Hotel is up there with my favourites (Read my review for Plaza Athenee). For unrivalled luxury, St Regis Bangkok is incredible!  We spent part of our honeymoon here back in 2012 and I cannot wait to return again soon! 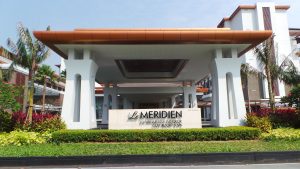