I can’t believe that I still haven’t written about our trip to the Temples of Angkor, the UNESCO heritage site in Siem Reap, Cambodia!  During our RTW travels in 2006, our 3 day visit to Angkor was one of the most incredible places we visited.  So this week, I’m looking back at that amazing

The Temples of Angkor, built by the Khmer empire, is the largest religious monument in the world.  Despite three long days, we only scratched the surface of the incredible 400+ acre site. As well as a three day pass, a one day or 7 day can be purchased (sadly as poor backpackers, we did not have the time, or think we had enough spare pennies to stay longer)

Each day, we explored the temples differently.  On the first, we arrived at The Temples of Angkor very early to catch a glimpse of the sun rising over Angkor Wat – the most iconic of the monuments.  Back in 2006 it was no where near as busy as it is seems to be today, and we shared the incredible experience with few others.  Most of those in the area were locals passing through, seemingly on their way to work 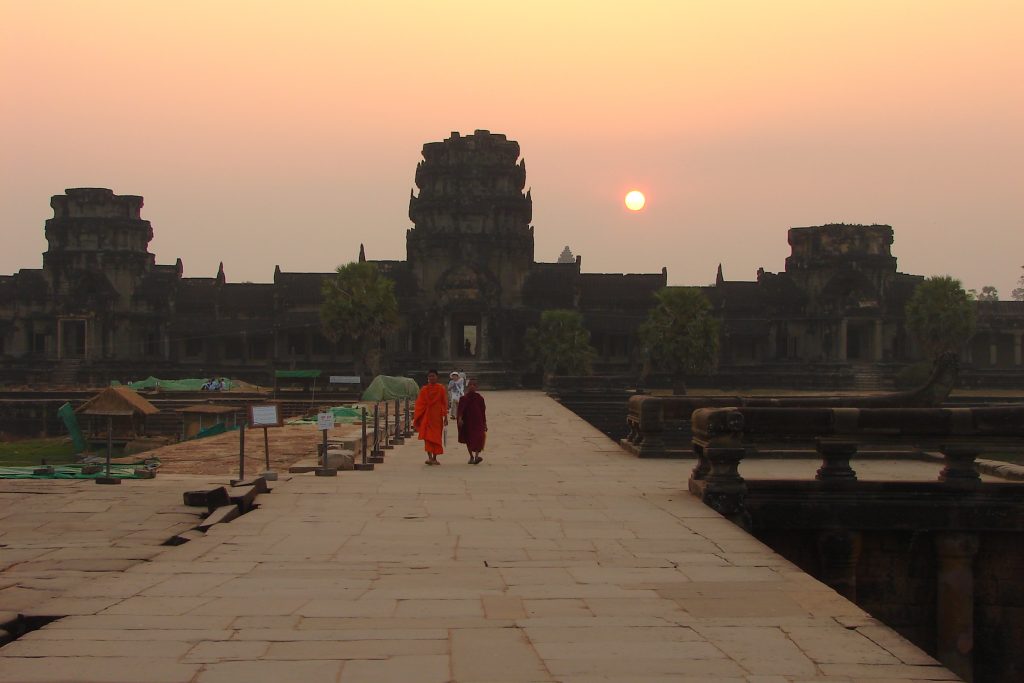 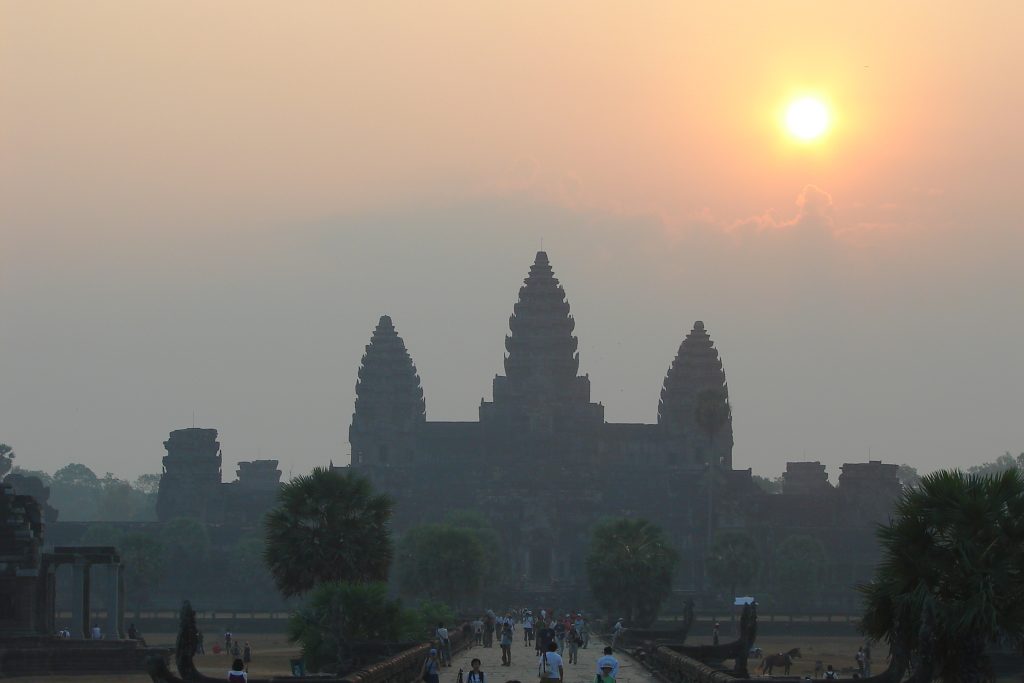 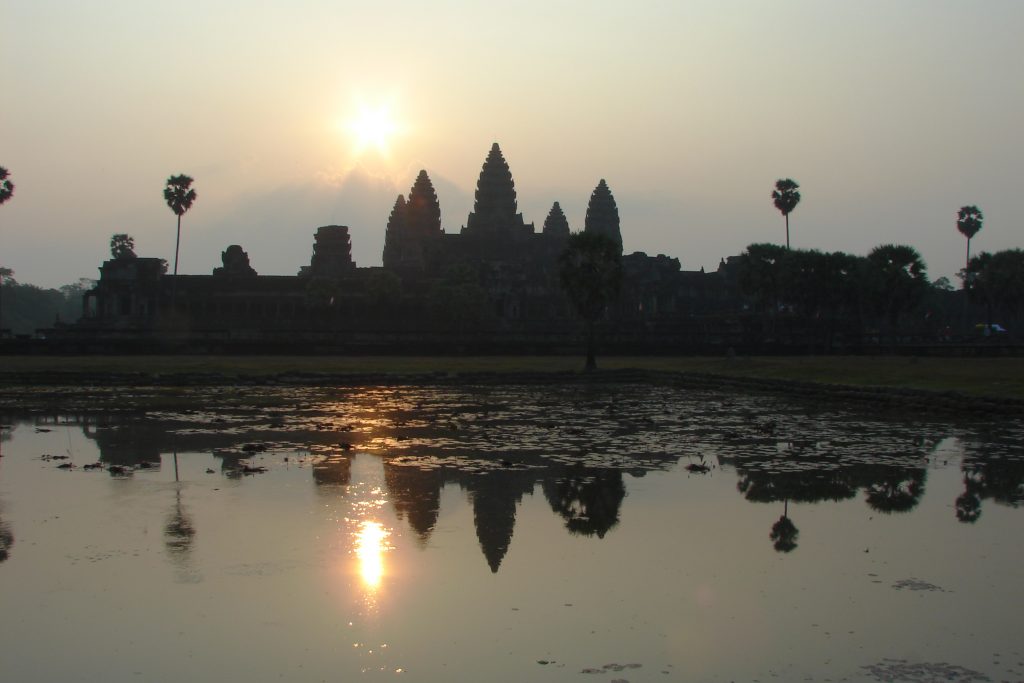 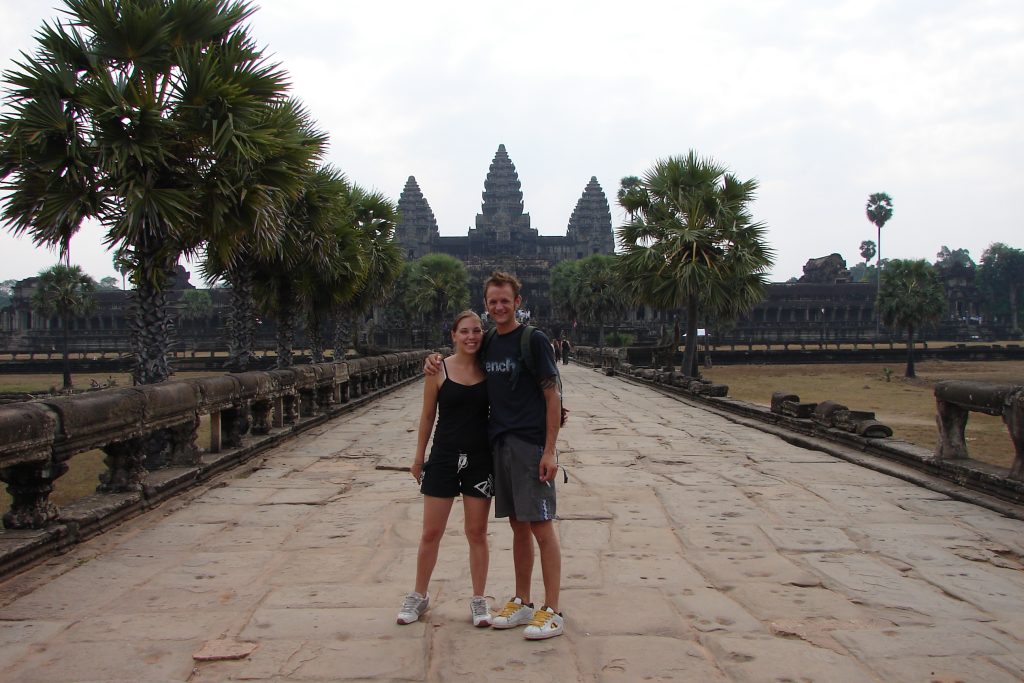 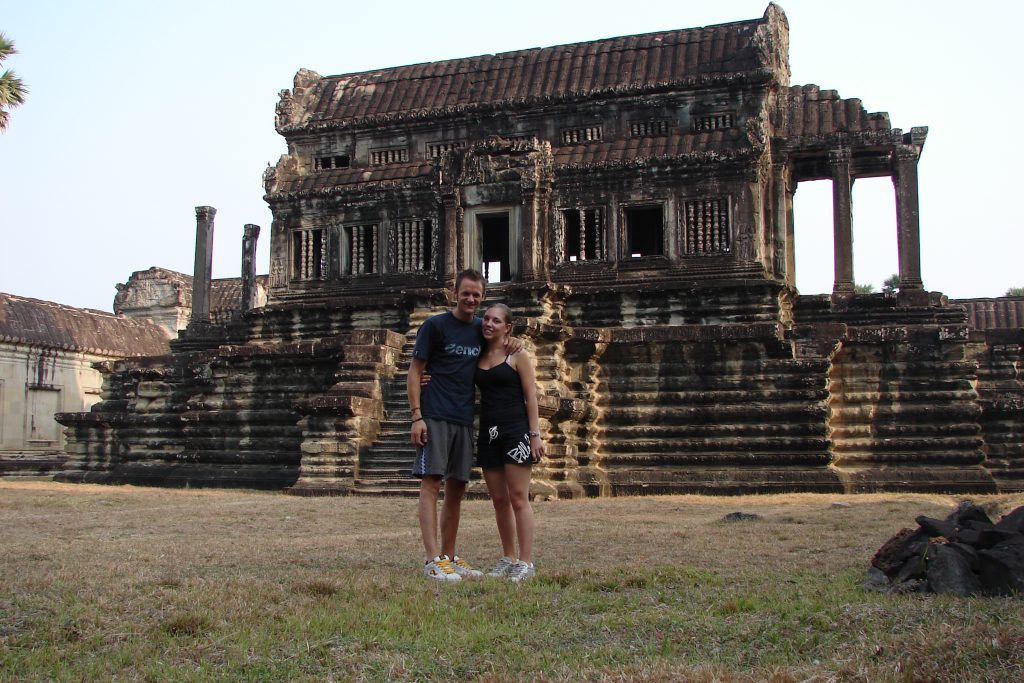 We explored the rest of the day by foot and by bicycle, which we hired within the site.  We visited those temples in close proximity to where we were staying in Siem Reap. (I wish I could remember the name of the guest house – it was incredible!) 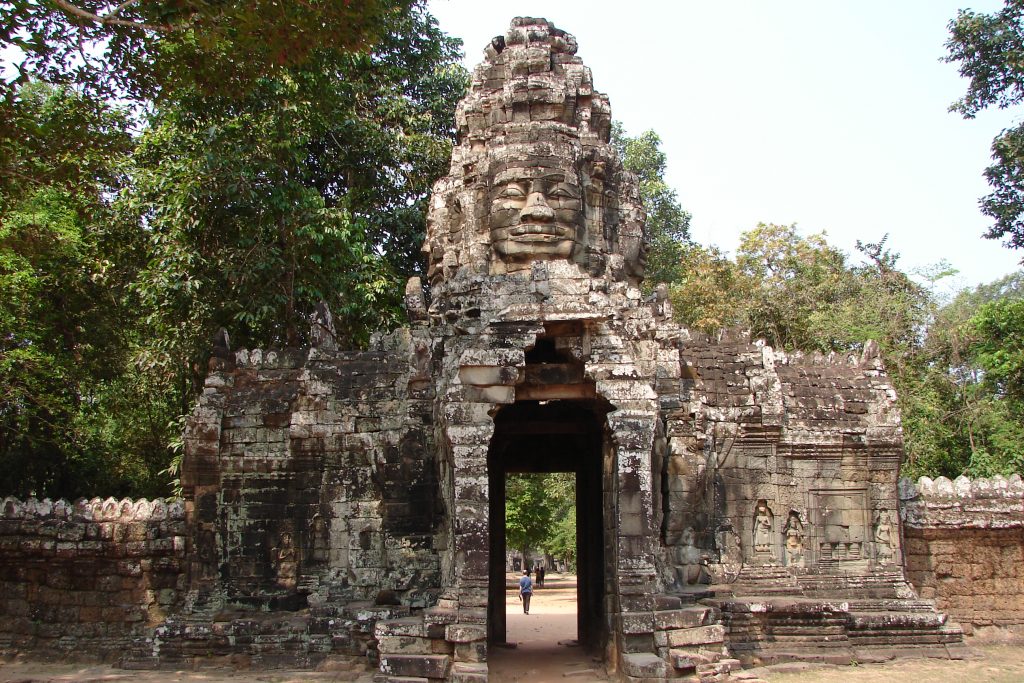 The ruins of Angkor were found under a cover of forest.  It’s amazing that over some of the temples, the roots of the trees are higher than the buildings themselves.  More amazing still is that they still remain, fairly in tact! 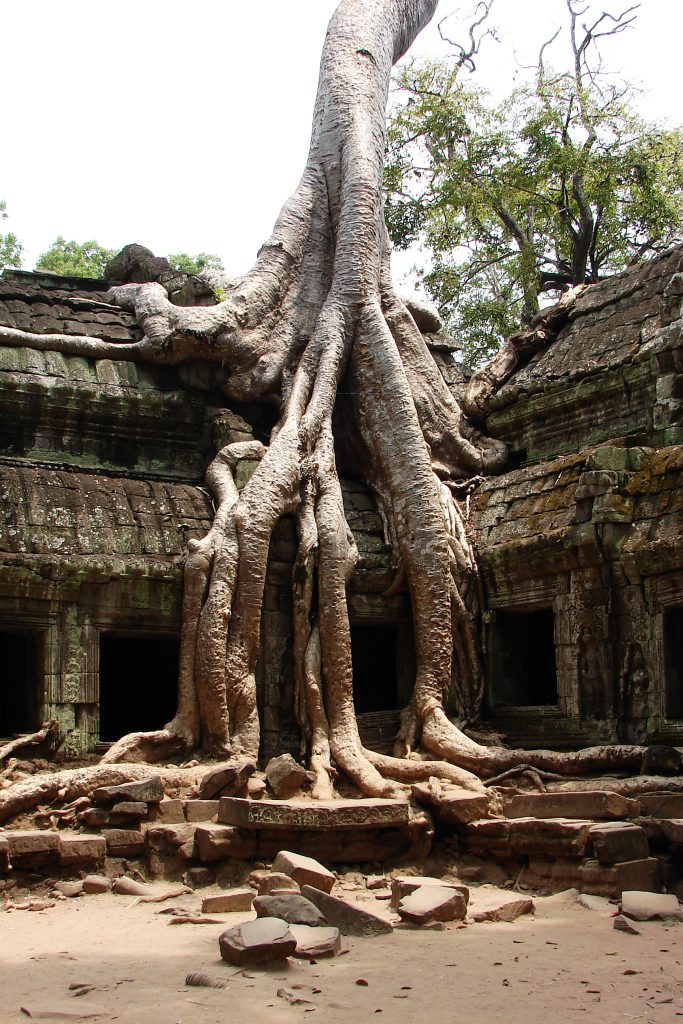 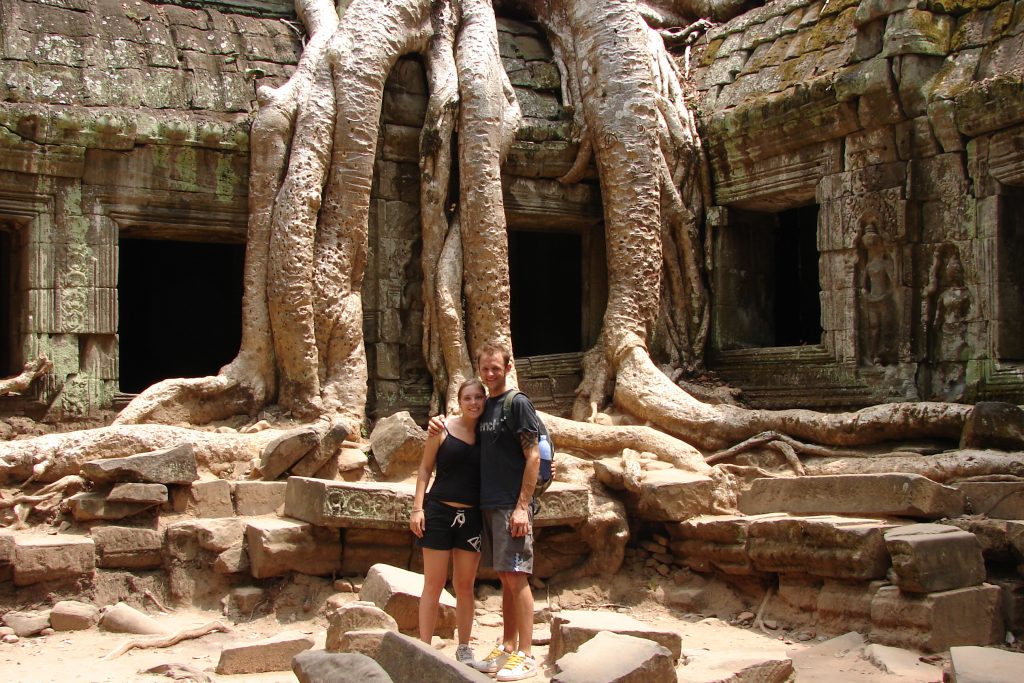 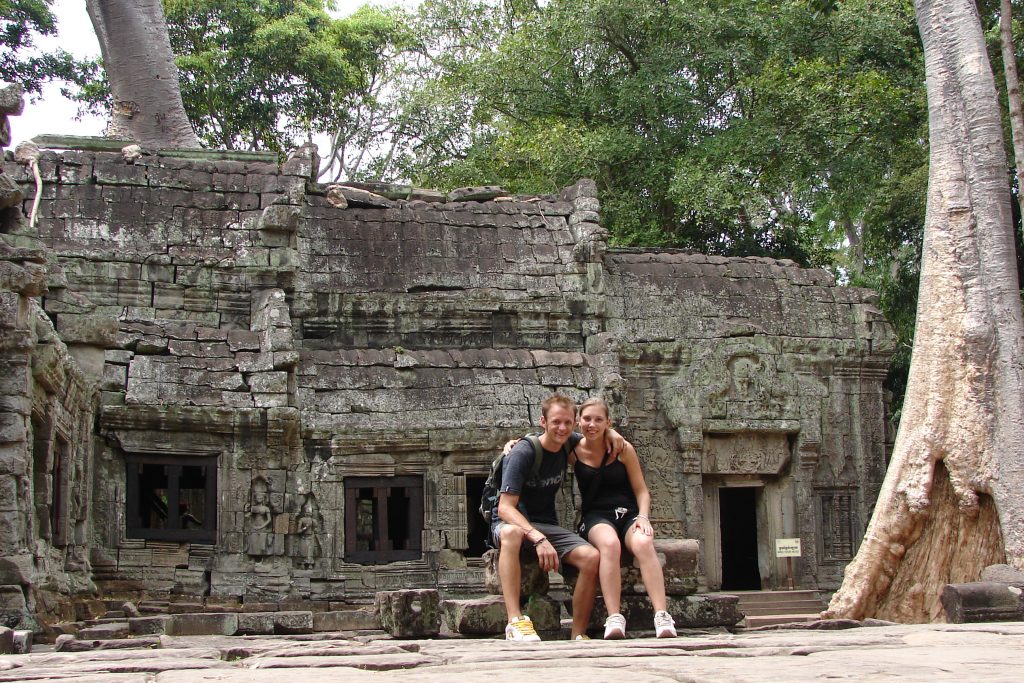 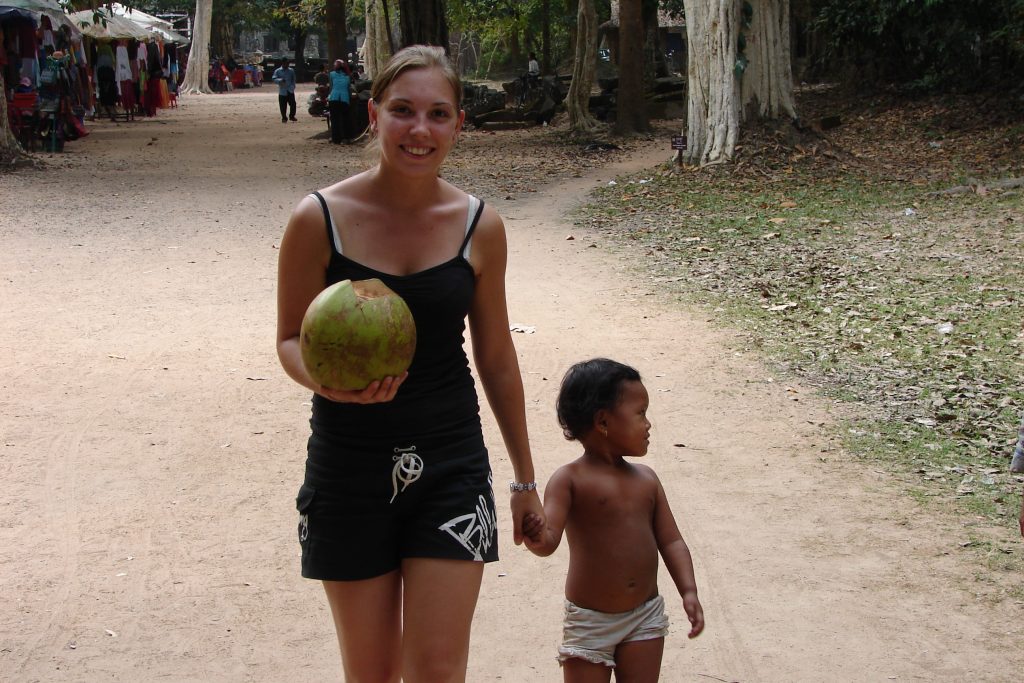 Electric Bikes, Deserted Monuments and Being chased by an upset Monkey

Day two of our trip to the Temples of Angkor found us exploring a bit further with the help of electric bikes.   There were rental spots dotted around the park to hire the bikes, we were able to charge our batteries on the way round. 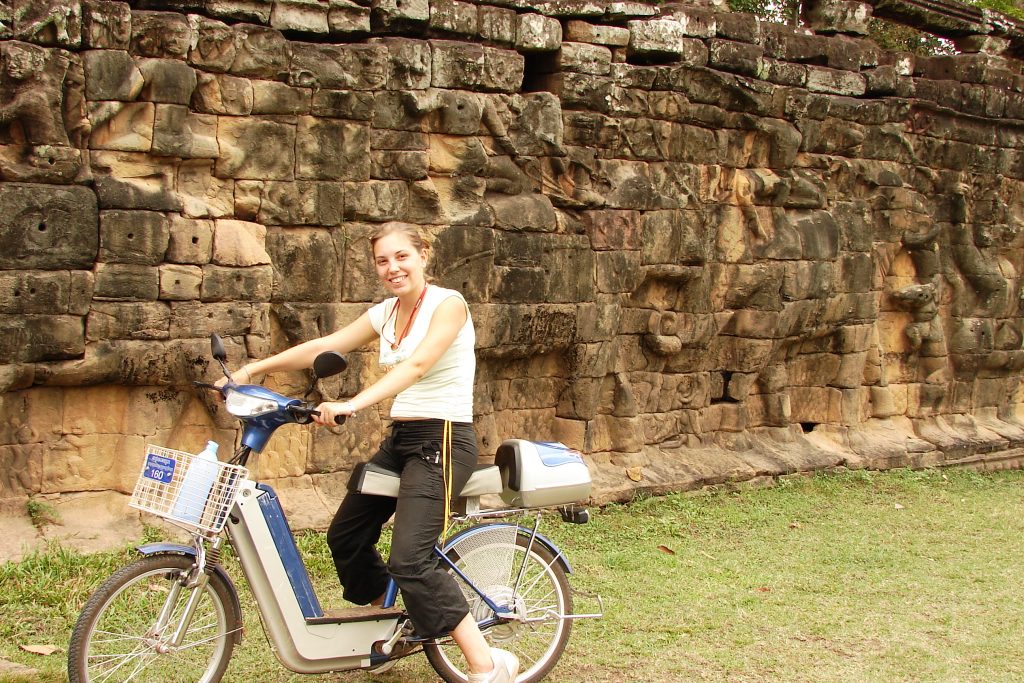 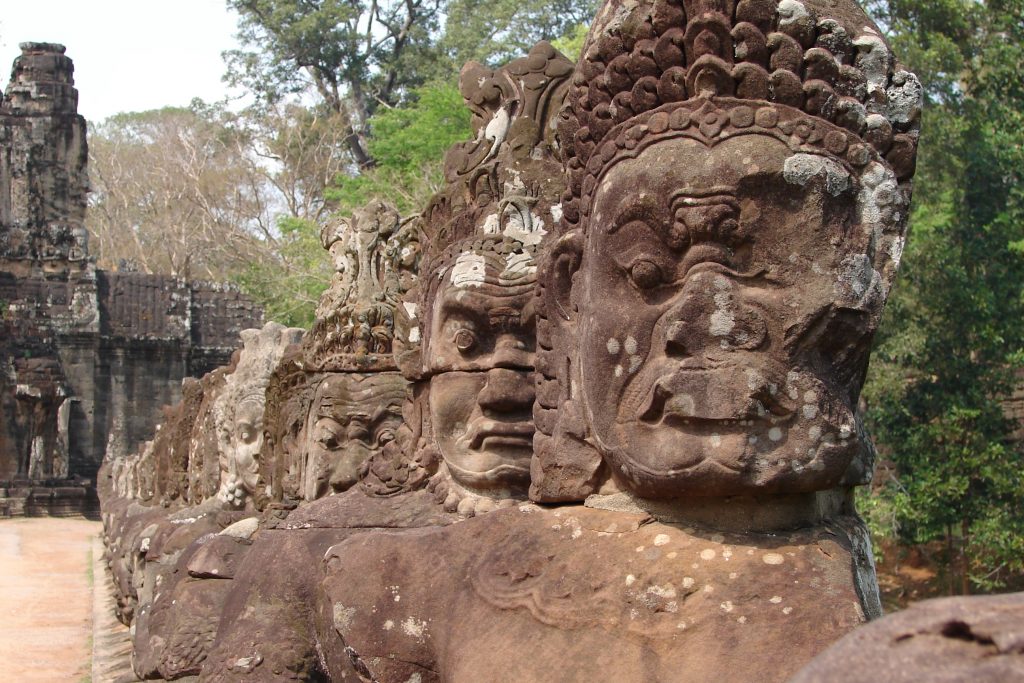 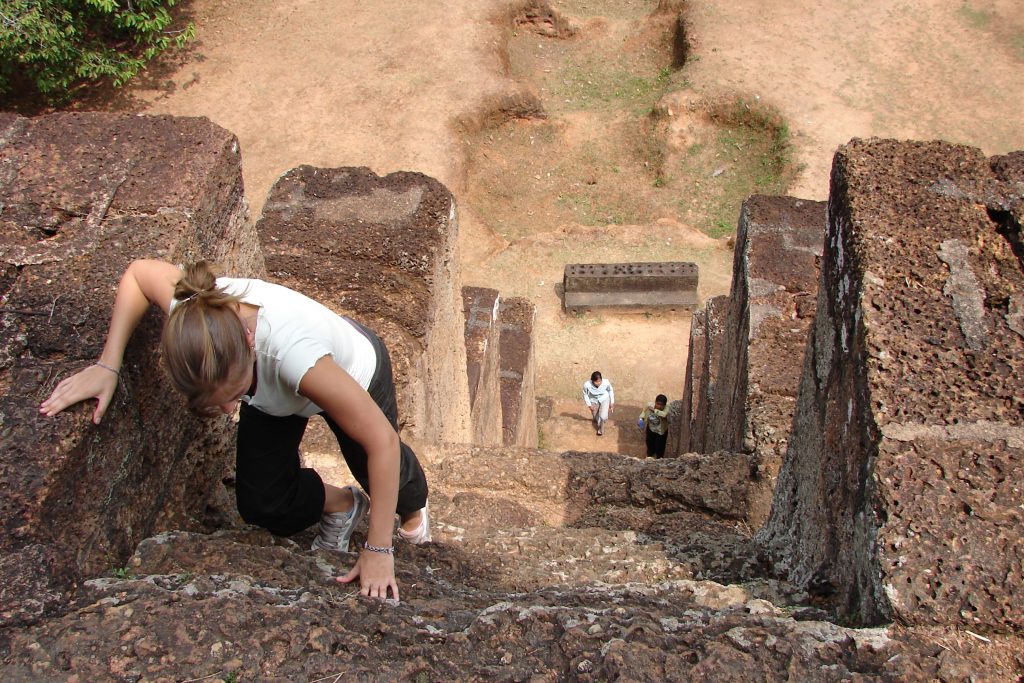 Thoroughly enjoying our day, we kind of forgot to charge them properly on the way round.  This became a bit of a sticking point after we stopped for Darren to take a photo of two monkeys having a good time together.  As he pointed the camera the money got a bit unhappy.  He clenched his teeth, hissed and began to chase us.  As we hopped on the bikes Darren shouted at me to peddle but I froze in fear as the battery became flat.  He had to push me away from a very agitated monkey.  Even to this day, we still clench our teeth and hiss at each other when it looks like someone is angry with us.

As we escaped, we head off to Bayon, a temple representing the intersection between heaven and earth.  There were lots of people exploring the ruins with us, but soon, we noticed that the temple had become deserted. We were amazed to have the temples to ourselves, and we could enjoy the incredible carved faces on our own.  We realised it was not luck that had been on our side. 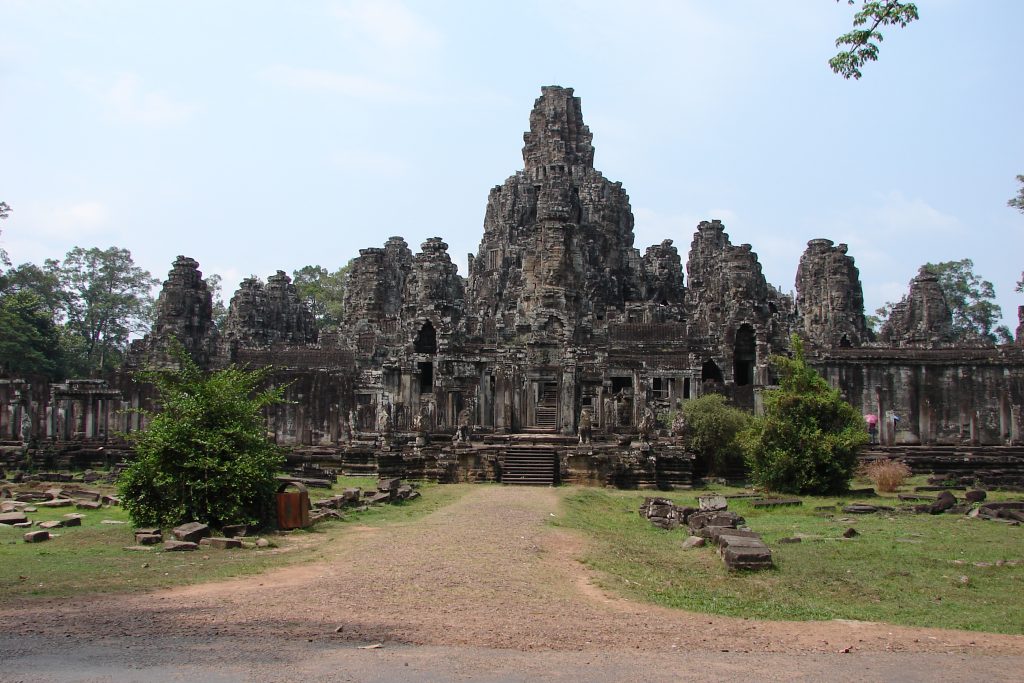 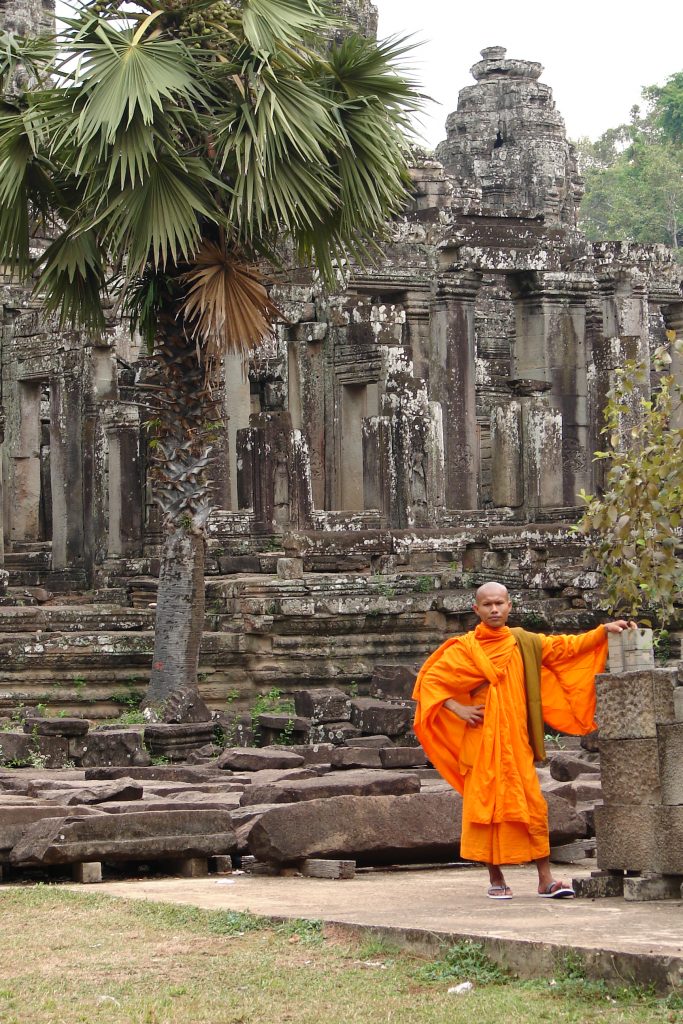 A few minutes after the peace and quite arrived, it was broken by the sound of rain.  Lots of loud and heavy rain.  More rain than I have ever seen in my life. 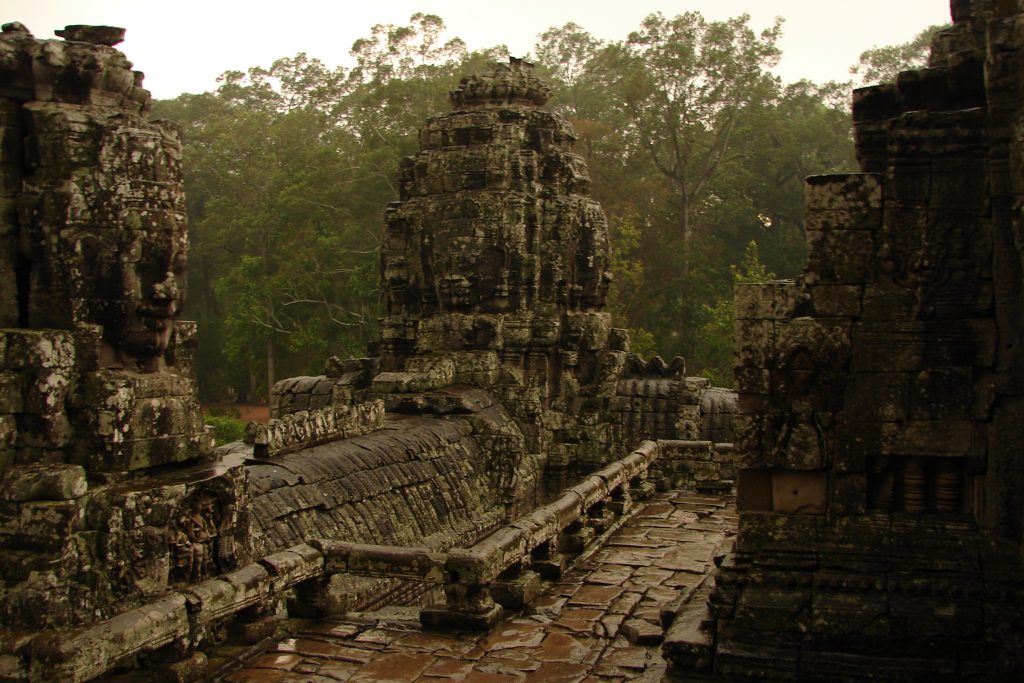 We were absolutely soaked, right to the bones.  Miles from ‘home’ we were getting cold.  Halfway back and the batteries which we should have charged better went flat again.  It was back to peddling the rest of the way.  The drop off points away from the exit had all closed up.  Even if they hadn’t there were no TukTuks to be seen.

Walking back to our guest house, rain still pouring, thunder started to clap.  Within seconds, lighting struck. We realised we were close to a lightening storm.  Somehow, Darren managed to photograph this strike at the exact moment it struck – its one of our favourite photos of our RTW trip. 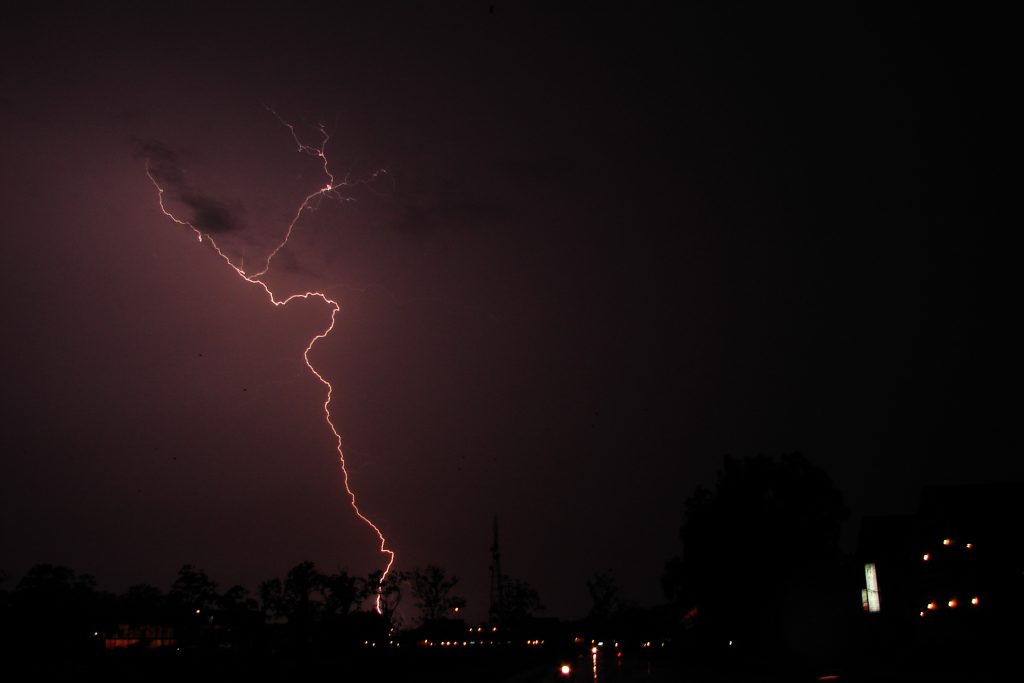 We ventured further on our third day in the Temples of Angkor by hiring a driver for the day.  Many of the temples further afield were being restored. 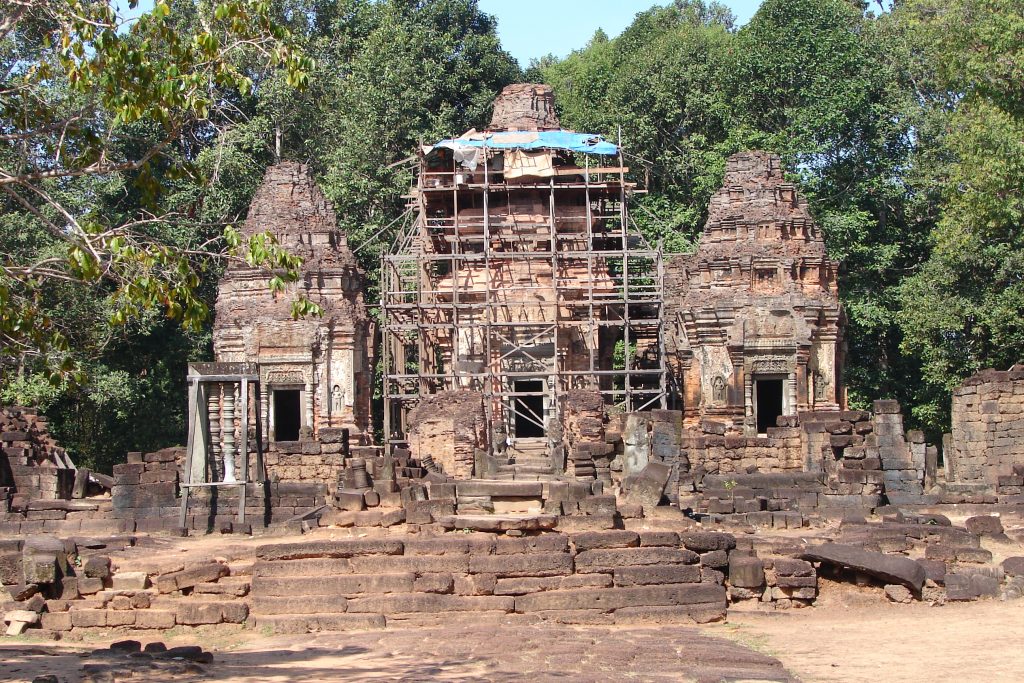 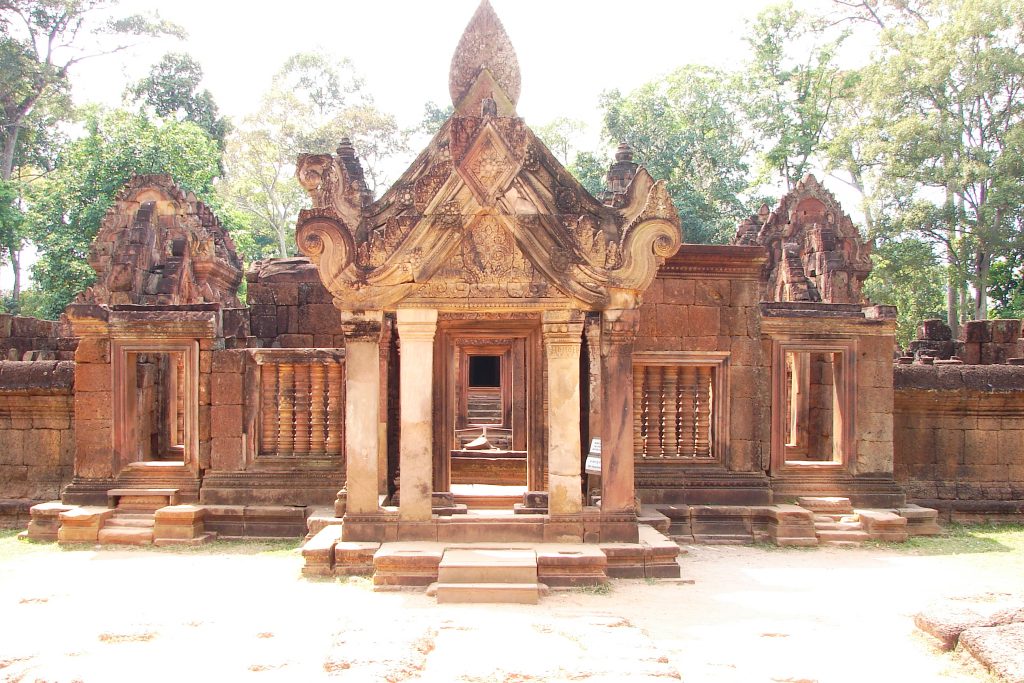 Looking through the photos today, I’ve found some I love.  This one here is one of around 10 pictures taken over a period of time when we forgot to set the timer on the camera and set it to take multiple shots – we look almost super imposed in the background. 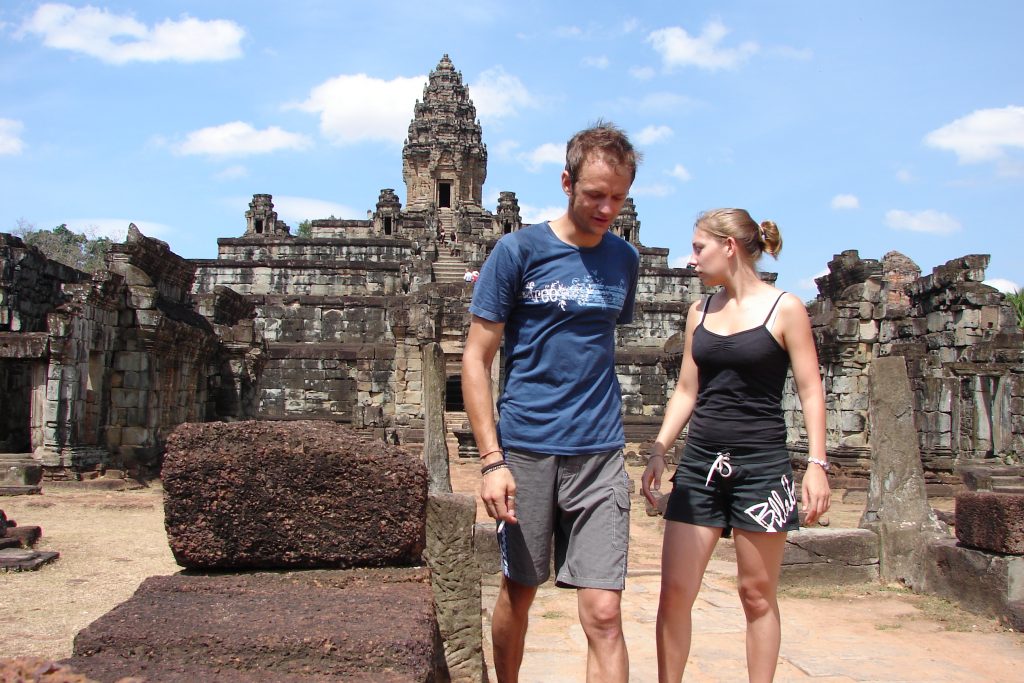 I also love this photo on the right – I had almost forgotten about the ‘demon’ which was a joke between my school friends and I.  It’s why I love writing posts reflecting on what we have done – it brings back so many memories which are otherwise safely stored.

The Temples of Angkor are a truly magical place.  Our old sony camera just doesn’t do it justice. Lonely Planet lists the temples as the worlds top destination.  No wonder over 2 million people visit each year!

If you’re looking for somewhere nice to stay, our friends Caryl & Paul of Vegan Food Quest (who we spent a lovely week in Koh Bulone with earlier this year) have their own ‘Vegan Villa‘ listed on Airbnb for just £15 a night.  Otherwise check out booking.com.  Or do as we did and turn up in Siem Reap – you may stumble across a real gem! 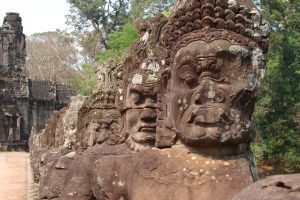